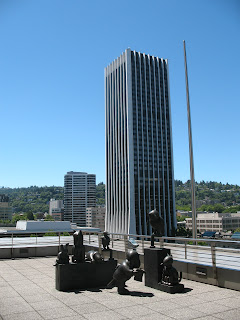 If you live in Portland, you’ve probably seen the looming ultramodern tower that is the Mark O. Hatfield U.S. Courthouse (MOHUSC). Since it was built in 1997 it’s a building that I’ve consistently admired, a fact that I find continually surprising for two reasons. For one, many of the things that I thought were cool in the ’90s (black turtlenecks, Mortal Kombat, putting “2000” on anything) are, in retrospect, sort of silly. Architecture in particular seems to wear its age badly, though. The things that probably looked futuristic and cutting-edge throughout the twentieth century usually look hopelessly anachronistic now. Postmodern buildings such as the Portland Building were edgy once, but they now they’re the structural equivalent of a George Michael album; dead-end fashions that everyone involved wants covered up.

Paradoxically, the recently contemporary often seems even more aged than the truly old. The boxy Oregon State Capitol exudes the 1930s, but the much older Capitol Building in Washington, D.C. seems timeless and therefore more contemporary. (Total aside, but this reminds me of the probably apocryphal story of an English professor who, in the 1950s, decided to translate Hamlet into beatnik so that young people could relate to it better. The resulting text ended up being utterly impenetrable ten years later, but the original Shakespeare could still be grokked without much difficulty.)
The point is, that if you’re going to make something and have it look edgy and contemporary and neato, you run the very high risk of being passe in a few years. When making big, permanent things like buildings, this is something you want to avoid. People are going to be staring at these buildings for quite some time, and you really want these buildings to seem contemporary in some form or fashion long after their styles were “cool.”
So far, the MOHUSC is holding up. When I walked through its lobby the other day, it impressed me as much as it did thirteen years ago. It seems utterly futuristic in a classy, subdued kind of way. The interior is filled with stark, quiet lines and blocky structures that are somehow also elegant. It’s big and stark and empty, but also impressive, precisely the kind of thing that made the young me want to be a lawyer. 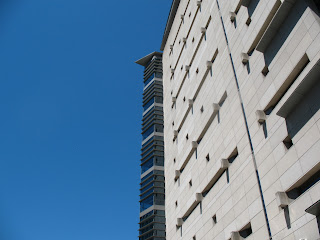 And it has a sculpture garden on the ninth floor.
Since the MOHUSC is a public building, anyone who wants to can walk right in, go up the elevator, and hang out in the sculpture garden. Granted, the sculptures themselves are sort of silly- a collection of animals and anthropomorphic computers that are collectively titled “Law of Nature” -but the space is highly neat. It is secluded, affords a great view of the city, and is open to the public. 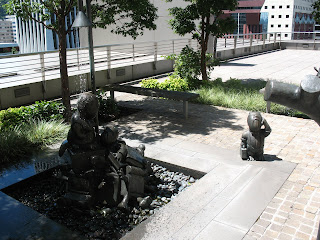 It’s a nice space in what could otherwise have been an utterly utilitarian government building. I was alone for the entire time I was up there, which I didn’t expect, but was refreshing. Again, the statues aren’t great art- they’re silly little animals dressed up as lawyers, but I like it that tucked away in a large, ultramodern building is a little bit of flourish, and anyone who likes may admire the skyline, the surrounding buildings, and the greenery below. 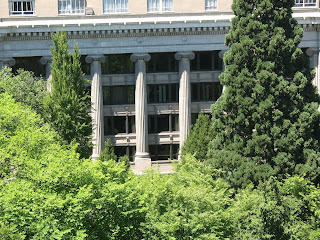 This entry was posted in Awesome Things, Portland. Bookmark the permalink.