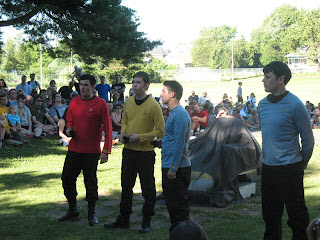 This is mostly about Star Trek, yes (as you can surmise from the accompanying illustration). But, bear with me as I digress for a moment about Star Wars.

Long ago, in the before time, I remember an era when Star Wars was still cool. In that time (the late 1990s) the movies were re-released in theaters, albeit with modernized special effects and additional footage. I remember sitting in a theater as an exuberant teenage, excited to see it all on the big screen. The audience whooped and applauded, laughed and hollered with raucous energy as the movie went on. Darth Vader was greeted with hoots and people shouting “yeah!” and a wave of applause went up when the Death Star exploded.

One of the biggest reactions from the audience, though, was towards the beginning. I remember it very clearly. Luke, kvetching to his uncle, says that he wants to go to Toshi Station with his friends and “pick up some power converters.”
The audience roared with laughter, applause, and general appreciation. It’s probably one of the cheesiest lines in Star Wars, and brings to mind all manner of B-movie derision. Luke’s line sounds precisely what some hack writer would think up to tell the audience “Hey, guys! We’re in a futuristic universe here!” and given what we know about George Lucas, that’s probably exactly what it was.
Nevertheless, the audience cheered with very real affection. The transparent artifice of the line did not stop them from loving it. If anything, it was the reason that they roared with approval.
I was reminded of that moment last weekend when I saw Trek in the Park, an event wherein a Portland theater troupe performs an episode of the original Star Trek live. I went to it last year and enjoyed myself, so there was no way I was going to miss it this time around.
Like last year, it was loads of fun. The particular episode they performed was Space Seed, better known as “the one with Khan in it.” The thing about the performance that reminded me of Luke’s legendarily groan-worthy line, was that Khan is from the 1990s. When Star Trek was aired in the sixties, I suppose that the nineties were still distant and future-y enough to write science fiction stories about. According to the original Star Trek timeline, Earth apparently got into an enormous eugenics war in the late twentieth century, bred a bunch of supermen, developed interstellar travel (but without FTL) and generally devolved into chaos. Space Seed contains several references to this, and to “the twentieth century” in general.
A few choice lines:
“Much older. DY-100 class, to be exact. Captain, the last such vessel was built centuries ago, back in the 1990s.”
“Seventy two alive. A group of people dating back to the 1990s. A discovery of some importance, Mister Spock. There are a great many unanswered questions about those years.”
“With simple nuclear-powered engines, star travel was considered impractical at that time.”
“Earth was on the verge of a dark ages. Whole populations were being bombed out of existence.”
“[Khan’s] age would be correct. In 1993, a group of these young supermen did seize power simultaneously in over forty nations.”
“From 1992 through 1996, [Khan was] absolute ruler of more than a quarter of your world. From Asia through the Middle East.”
…and so on.
The performers, though, made absolutely no attempt to cover up how unashamedly retro this all was. If anything they reveled in it. Much like that crowd at the screening of Star Wars who had such a great reaction to Luke’s ultra-cheesy line, the crowd lapped up with verve and amusement any reference to the nineties, and anything else hokey or otherwise dated. On top of that, a full complement of electronic music and woo-woo sound effects accompanied the performance. All through the production music that would have been massively futuristic fifty years ago hummed away.
What was weird is that the hokey stuff really made it all better. The concession to genre, anachronism, and borderline kitsch seemed to alchemically combine into something that was, actually, very awesome. Had they attempted to modernize the production or play it straight, it wouldn’t have been nearly as enjoyable. Nor do I think (and this is what I find sort of weird) I wouldn’t have been nearly as emotionally invested in what was going on.
I am fascinated by an audience’s ability to laugh at something for being silly, hokey, and sort of dumb; but at the same time be utterly charmed and on board with it. Nearly every single person there was utterly into how, well, Star Trek-y it all was, how a piece of sixties SF was walking and talking right in front of us. We were rooting for it because it was anachronistic, full of genre conventions, and of its. Not despite those things. We can laugh at the absurdity of another time without mocking it, regard artifacts as absurd and all the while wholeheartedly embrace them.
This entry was posted in Science Fiction, Theater. Bookmark the permalink.