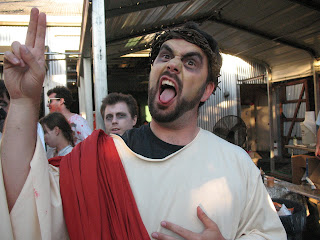 Last night I found myself wearing a Jesus costume and leading a coterie of bicyclists dressed as zombies around NE Portland. Our fair city’s (now annual) zombie bike ride was upon us, and for a number of reasons I suddenly found myself leading the thing. Needing to stand out from the biking horde of slavering cyclists, I decided to comport myself as the most famous zombie ever, a dude who shambled out of his grave three days after a rather nasty torture/execution session.

We met up in a park, and my friend L was good enough to show up with a batch of corn syrup, red food dye, and flour. As I’d only recently had the responsibility of the ride foisted on me, and didn’t have any fake blood, L was a lifesaver (or rather, unlifersaver) for bringing the hemoglobin. A few pictures-
Here’s L, devouring her somewhat chagrined boyfriend: 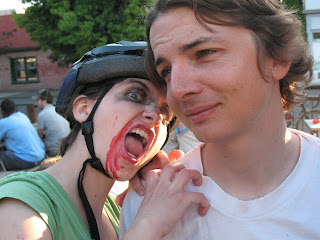 This gentleman did the “military guy gets zombified” thing. He had very creepy teeth. 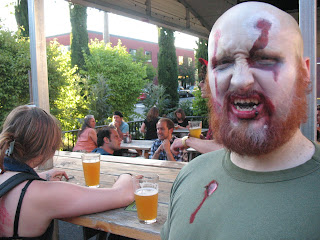 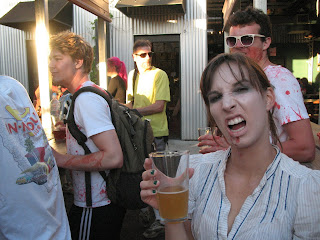 Slathered in L’s fake blood, this girl looked a bit more like Carrie than a zombie, but she certainly pulled it off. She should watch out, though, because the girl behind her seems to be contemplating Carrie-centric mastication. 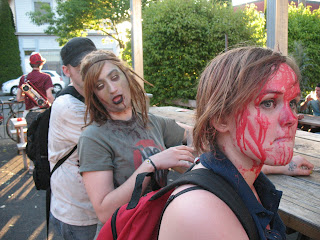 Our attempt at a zombie last supper: 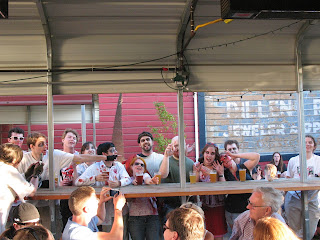 You can’t really see it in the picture, but these girls are covered in glitter blood. We decided they were Twilight zombies. 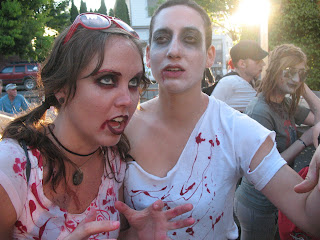 Zombie dance! We stopped at three places, and rocked out to Thriller at two of them. The night closed with zombie karaoke at a tiki bar where numerous zombies (as in the drink) were consumed. I decided that the best thing for Zombie Jesus to sing would be Highway to Hell. 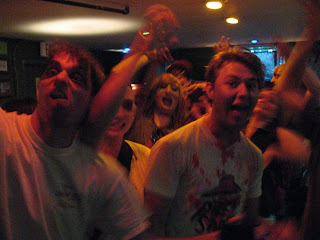 As people went home, more than a few of them said “Thank you, Jesus!” I kind of love my lifestyle.
This entry was posted in Athletics, Horror, Portland, Religion. Bookmark the permalink.

3 Responses to Late Evening of the Living Dead Bicyclists