"It Seems To Be Some Sort of Internationally Recognized Landmark…" 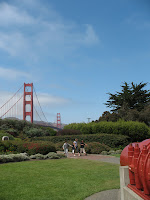 That Robert Frost poem is really misinterpreted. The Road Not Taken isn’t about rugged individualism or how wonderfully shiny self-expression is. It’s sort of an ironic poem, really, if you bother to read the whole damn thing and not just take the last bit and paste it on a Hallmark card.

Yet, there seems to be a certain breed of snob out there who take that shit literally, who blanch at the idea of seeing a tourist site, who shudder at the thought of going to any place that’s going to swarmed by families with cameras and baseball caps. I’ll cop to having a little bit of this attitude in me. Even as we approached the Golden Gate Bridge, a place I specifically wanted to go, my inner hipster-snob-asshole voice said “Oh god, we’re tourists now.” Once the thing reared up on the skyline, though, once the great orange towers reared up against the sky, I was duly impressed with the thing, and able to shove the annoying inner voice down into a mental oubliette where he belongs. We got out of the car and there were indeed several families with cameras and baseball caps swarming about- khaki shorts, sweatshirts, minivans.

The contemptuous arrogant bastard was safely in his damp little hole, though, and I was determined to be a tourist and enjoy it. I like being a tourist. People who say, “Oh, I love traveling but I hate tourists,” or “I’m a traveler, not a tourist,” are hypocrites. I like the sense of renewed perception that comes from being in a new venue, and I like seeing what the place has to offer. That includes places that are staggeringly famous and overrun with out-of-towners. While I do like wandering about on my own in the non-famous parts of a place (and did plenty of that in SF) there is a certain feeling of niceness that comes from going to a place that is absolutely, unmistakably famous. Iconic and symbolic. Somewhere or something that encapsulates its city, region, or country.

Every time I stood at Hachiko crossing in Shibuya, I sensed that I was somehow taking in an abreviated version of Tokyo, a kind of concentrated, focused bit of the city’s zeitgeist. I felt the same way about the Shanghai’s Pudong skyline, an image that fired rapid development into the the night sky. Chicago’s Lake Shore Drive is like that. Driving down it you think, “Yes, there are the Big Shoulders, right there. There’s the unmistakable something-ness of this place.”

The Golden Gate is, of course, a symbol of San Francisco. It’s also a symbol of everything that San Francisco represents, and that’s saying a lot. It’s also a big damn bridge. I love seeing the functionality of these places, knowing that this thing that’s a symbol of so many amorphous things is also part of someone’s daily commute. That’s great. Walking across the bridge, I loved seeing the road signs. This thing that gets imprinted on so many cheap gifts and duplicated in so much media is a living, workable thing, and you would be an asshole to try a U-turn on it. 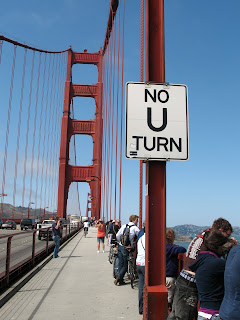 I was sort of pleased to see, though, that there really are rather prominent anti-suicide signs on the bridge. I guess that’s one other thing that the bridge is famous for- the dramatic ejection of people and things into the San Francisco Bay. One of my high school English teachers claimed to have angrily thrown her engagement ring from the bridge. Seeing the signs though, I wondered how big a drama queen you’d have to be to kill yourself by jumping from this thing. What a cry for attention. What a final, pathetic “hey, guys- lookit me!” act. You’d have to have a weird alchemy of self-loathing and self-aggrandizement to actually do it. 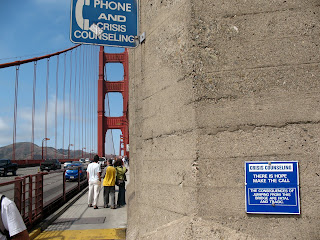 I loved it, though. I loved that it was crowded and covered with camera flashes, the feeling that somehow we were participating in something significant just by walking across a sizable piece of urban engineering. I loved that it was crowded with bicycles and people shouting, plenty of people walking along and making use of this gigantic, significant and beautiful bit of metal and concrete. Yes, I thought, this is the Golden Fucking Gate Bridge and I’m experiencing it right now. I’m on it. I’m on top of this thing, that whose image I’ve seen, but now my experience is unmediated. 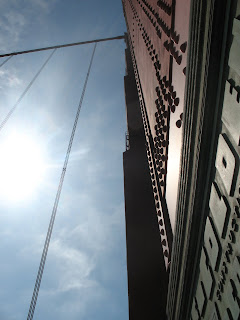 One last thing- I was lucky enough to be with three friends from Japan, people with whom I was very pleased to see again. Six months ago I left, and wondered what my relationships with people there would be like in the future I wondered if the connections would hold. Here, they did. My friendships, it seems, can take a bit of abuse and estrangement, which is an encouraging, when you think about it. We looked across to the Pacific and waved to our erstwhile home. “Hi, Japan!” we said, jumping up and down with utterly appropriate overenthusiasm. Seeing them was excellent and I feel that this picture is utterly representative of them. 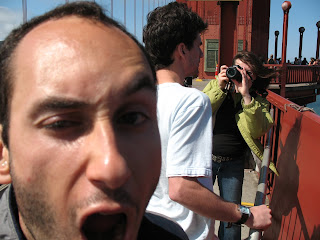 This entry was posted in San Francisco, Travel. Bookmark the permalink.