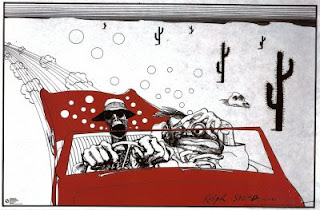 For a long time, I had a pretty good idea of what Hunter S. Thompson without ever actually reading any of his books. This was a guy who was all about drugs, guns, insanity, weirdness and of a very particular authorial voice. Maybe it’s because I grew up reading Doonesbury and was familiar with Uncle Duke. He also seems to be a sort of hero to a certain kind of hipster male, the type with whom I often associate. Whatever the cause, I felt like I knew Thompson pretty well already, knew exactly what I was getting into when I finally picked up Fear and Loathing in Las Vegas last week.

I want to say that I was utterly surprised, that there were things about Thompson’s persona and style that the general cultural effluvia hadn’t yet revealed to me. Unfortunately, I can’t really do that. I knew exactly what I was getting into, and FaLiLV is pretty much exactly what I thought it would be- a drug-loaded travel book written in an expansive, splattery style that meshes perfectly with the Ralph Steadman illustrations that accompany it.

I read the book in two days, and I think that’s a good sign, usually, if you read a book and have no idea where the pages are going. The action clips along fairly rapidly and one thing I have to say for Thompson is that he isn’t boring. He is very, very not boring. Thopson’s voice is his strong suit, his ability to inject his own brand of energy and insanity into whatever’s around him. His voice is meaty, big, and ravenous. At no point could you ever mistake it for a book by someone else, at no point is Thompson generic or anonymous. He stamps each sentence as his own.

I love authors who can do this, but they also leave me occasionally unsatisfied. FaLiLV doesn’t really have a plot. Well, it has a really thin plot wherein Raoul Duke (Thompson’s literary persona) and Dr. Gonzo (his attorney) are supposed to cover a motorcycle race and DAs’ conference, but that’s more of an excuse for the whole jaunt. Thompson gets by almost entirely sheer charisma, strength of voice, and sheer power of his prose. There’s no real drama, plot, or character development- just the sheer power of Thompson’s Gonzo Journalism.

I’m reading Tropic of Capricorn right now, and Henry Miller is much the same way. So are Joyce, Kerouac, and Woolf, for that matter. I love these authors, I love their fantastically beautiful use of words. If I could write a third as well as any of them, I’d be ecstatic. But, I want to experience books as more than just aesthetic things. I want to be intellectually stimulated. I don’t just want wonder and beauty, I want something interesting to think about.

When I read, I can’t help but look for those things. When I read Mrs. Dalloway, as much as I enjoyed it as a beautiful and wonderful work of art, I couldn’t help but think about World War One. With Thompson, I had a similar experience. I kept looking for something to think about in the book, some core idea or ideal. As much as I enjoyed the balls-out wildness, I was needed something social, cultural, and political to relate the book to.

Fortunately, I think Thompson was, too. I don’t know how drug addled he was when he wrote the book, but interspersed with all of the decadence, vomit, and weirdness, Thompson has a much larger point on the death of the Sixties. Reading the book in San Francisco, I couldn’t help but think about the Sixties, hippies, and everything radical and weird that rose up with my parents’ generation.

Thompson reminisces about his experience of the Sixties, of San Francisco, and while sitting and reading in that same city this particular passage (which I later learned is the second most famous section of the book, after the intro) struck me:

There was madness in any direction, at any hour. If not across the Bay, then up the Golden Gate or down to Los Altos or La Honda. . . . You could strike sparks anywhere. There was a fantastic universal sense that whatever we were doing was right, that we were winning. . . .

And that, I think, was the handle—that sense of inevitable victory over the forces of Old and Evil. Not in any mean or military sense; we didn’t need that. Our energy would simply prevail. There was no point in fighting — on our side or theirs. We had all the momentum; we were riding the crest of a high and beautiful wave. . . .

So now, less than five years later, you can go up on a steep hill in Las Vegas and look West, and with the right kind of eyes you can almost see the high-water mark — that place where the wave finally broke and rolled back.

He just summed it all up there. The Sixties were significant and revolutionary, yes, but also facile and naive. What kind of values are “Peace” and “Love,” really? Such generalities are unassailable and unformed, and one might as well support “Food” and “Water.” As much change as there was, the overall mindset of the hippies was one lacked a coherence and depth. Popular opinion did change America dramatically, but at the end of the day plenty of the old paradigms and demons were still around. What happened was social change, not ascension or mass enlightenment.

The drugs, of course, were part of that. Or rather, they weren’t. Duke and Dr. Gonzo spend the book in various states of inebriation. But it’s only that. Their debauchery and excess is only debauchery and excess. None of the various drugs bring them close to some kind of Timothy Leary style epiphany. Thompson even calls Leary out on that directly at one point. As much as FaLiLV may glorify or glamorize drug use, Thompson repudiates the idea that the things are a shortcut to some kind of grand cosmic understanding. To him they are depraved and perhaps enjoyable things, but, at the end of the day, simply chemicals. There is no road to Nirvana in a tab of acid or pill. There is only visceral pleasure and excess.

For this, FaLiLV stood out for me as not only an aesthetic experience, but also as a critical response to the Sixties from someone inside the counterculture. Thompson does not repudiate the hippie generation because he’s against them, his issue with them is that so much of what they believed turned out to be nothing but air. It was like a whirlwind that swirled everything about, ravaged the landscape and jostled it. But, the wind dissipated. It wasn’t solid. What’s so funny about peace, love and understanding? They’re so general and open-ended that you can’t build anything coherent on or around them, that’s what. Thompson recognizes the energy and wonder of the Sixties, but he does not pretend that there was no shortage of vacuity and unfounded idealism, innocence just waiting to be crushed.

Later, when Duke and Dr. Gonzo attend a DA’s conference, that naivete is shown in reverse. This time, it’s law enforcement who has no idea what anything means. The presentations that they attend about how to identify “dope fiends” are clueless and dated, on par with Reefer Madness. Just as the hippies and flower children see nothing but sunlight and happiness, the DAs only see whacked-out rapists, chronic masturbators, and murderous psychopaths when they look at the so-called “drug culture.” No one perceives moderation. Not even Thompson, really. The conversation is starkly uninformed on all fronts, to the benefit of no one.

I was happy to finally spend a bit of time with the father of Gonzo Journalism. He (or at least his literary persona) seemed depraved yet extraodinarily intelligent. Weird, and three steps away from ranting at pedestrians in front of a Safeway, saved by his inner articulate nature. I’ll probably revisit him- his book about the ’72 Presidential campaign is supposed to be a noteworthy political tome. Mostly, I want to hear him talk about Nixon in that stupendous voice of his.

This entry was posted in Books. Bookmark the permalink.