Recently got back from a trip to the lovely Bay Area. While walking through downtown with some friends we happened upon a fountain that had been unexpectedly and frothily filled with bubbles. 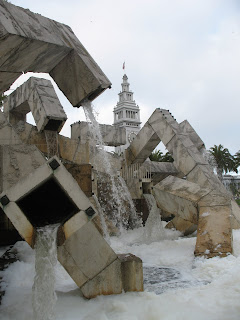 Foam was pouring out of the thing and bits of it were getting carried all over the square by the winds. Kids were running after bits of it and a nearby outdoor yoga class continued on despite the artificial snow that was pelting them. 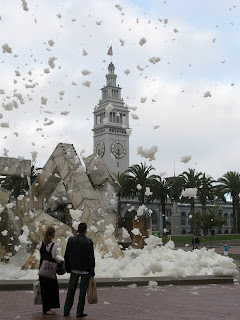 I thought for a minute “Is it supposed to do that?” and asked a nearby security guard what the deal with the fountain was. “Someone poured detergent into it,” he said, smiling. He didn’t seem bothered by it at all. Maybe the fountain wasn’t in his security-guard jurisdiction, but he seemed to be enjoying the casual vandalism as much as anyone. I wondered if the perpetrators had been inspired by that one guy who threw red dye into Trevi Fountain a few years ago.

This is why I love the West Coast. From San Francisco to Seattle there seems to be a prevailing feel for this sort of thing, this kind of verve and life. I remember reading Ecotopia in high school and encountering similar ideas in Nine Nations of North America later in college. In both cases, I thought the authors made for too much of regional differences. However, I don’t think their ideas were totally unfounded. There is an identifiable aesthetic and way of things here, one that I love and appreciate. People complain about Portland being overrun by “hipster douchebags” (a phrase anymore that is a collocation) but I know that they’re coming out here for this sort of thing- flurries of mischief and joy, with amused security guards looking on.

This entry was posted in San Francisco. Bookmark the permalink.

One Response to Bubbles!