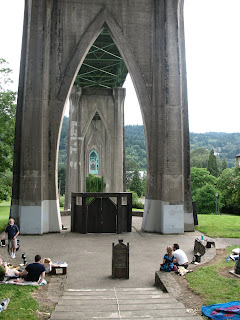 Along with The Tempest, King Lear is probably one of my two favorite Shakespeare plays. I remember, very clearly, the process of reading it for the first time.

It was my birthday, my eighteenth birthday, and I couldn’t sleep. I looked up at the clock and saw that it was three in the morning, but no part of the mechanisms of sleep complied with that. I knew that I would miss three hours of rest, that I would be a unslept and groggy on my first day of legal adulthood, so I figured that I might as well do something productive with my time. I got out King Lear, which I needed to read for English later that week. I read the whole thing before my first class started, pretty much unable to put it down. I found it surprising. It was so very, very dark that I was inescapably captivated by it. It’s a play with storms, insanity, torture and death aplenty, and I couldn’t put it down, even though I found myself getting more bummed out as I continued to read it.

The morning of my eighteenth birthday, King Lear depressed the hell out of me. Reading it for the very first time with no idea of what happened at the end gave me this feeling of “Oh god, there is nothing positive about the world.” So of course it’s become one of my favorite bits of literature ever, and I jumped at the chance to see it on Thursday in Cathedral Park.

When one thinks of the phrase “Shakespeare in the park,” one often imagines fumbled lines, missed cues, and the inarticulate trampling of iambic petameter. I showed up fully expecting the production to be very “okay” and was surprised to see that the Portland Actors Ensemble did a terrific job. In face, the “in the park” aspect of it was one of the best things about the production. The outdoor venue and public space were a serious asset for the whole thing, rather than a liability.

Take a look at that picture of the underside of the St. John’s Bridge there. You like big, creepy gothic stuff? I know I do. Well, how do you like them arches? Now imagine some old dude screaming up up at those neo-gothic arches and shouting “And thou, all-shaking thunder, smite flat the thick rotundity ‘o the world!” Get the picture? Pretty fucking sweet, huh? Even better than that, it was actually raining. Not as much as it really could have been- not enough for Lear to have a full-blown storm to rage at, but it was a nice addition, nonetheless.

It was also neat to see the actors entering and exiting from all directions. Yes, I know that having actors climb through the fourth wall is something that’s been around for quite some time, but when done right it’s still highly cool. More than having entrances and exits via the stairwell that ran through the audience, though (there it is in the picture) was that after the intermission the doorway in the arch was taken down and one could see the actors striding toward the center of the stage, sihouetted in the archway before they made their entrances. Having Edmund in shadows in the background while Glouster wailed up at the sky behind his bloody eyemask was really, really fucking cool.

By the end of the play I’d totally forgotten that I was at a free performance. No, scratch that. I hadn’t forgotten that I was at a free performance. Rather, the DIY-ness of it all just increased my enjoyment of it. They were using a public space instead of a set, fairly cheap costumes, there was ambient noise from the bridge and the street, everyone was getting rained on, and that made it all better. This wasn’t art inside some hermetic space or presented in some sort of pristine matter. The messiness of the situation granted it a certain kind of authenticity. That’s what it had- authenticity. That’s what I want, what so many people of my age and type want. Something stripped of artifice and slickness, or at least something that is conscious of such. Moreover, lack of artifice should be supplanted with a certain unfeigned enthusiasm, a truthfulness and security in one’s actions and creations, an unsentimental sincerity that seems to pervade the DIY aesthetic. Lear in the park certainly had that.

I had a blast, and am certainly planning on seeing their next performance, Henry IV Part One. Also, I rented Ran, Kurosawa’s film based on Lear. Totally epic, and the subject of a future post.

This entry was posted in Shakespeare, Theater. Bookmark the permalink.