The Most Fun You Can Possibly Have Without Actually Having Sex 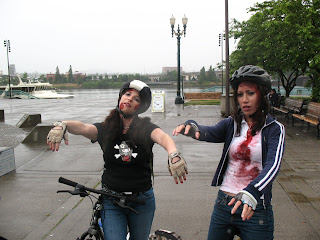 Various bottles of the stuff were being passed around. “Thanks,” I said, and doused myself in a fair amount of it. I’d blackened my eyes, smeared white makeup all over my face, and torn up one of my dress shirts. I did not, however, have time for blood. I looked like an overzealous Misfits fan than a zombie, really, but my fellow undead were happy to fix that for me. Various other people were in lycra or street clothes, but the zealous hordes of the nonliving saw too it that they were sufficiently made up. I got myself good and red, dousing some blood on my face for good measure. I was ready to ride through Portland and demand brains.

Pedalpalooza is an annual sixteen-day series of bike events here in Portland, most of which are theme rides. Looking at the calendar, the one that I was determined to go to was the zombie ride, because, well, it was an opportunity to dress up as a zombie. Riding through Portland, shouting “BRAAAAIIINS!!!” at various pedestrians garnered us three main responses:

1- People ignoring us, pretending that a large crowd of bike-based undead were not, in fact, demanding culinary use of their grey matter. This was the most common reaction.

2- Some variant of “Woo!” This was fairly common, which I think speaks well of the citizenry of Portland. They are open-minded enough that they don’t mind restless revenants consuming said open minds.

3- Some variant of “Fuck you!” Very few people had this reaction. I decided that those who did take offense to our antics were tortured, unhappy souls who needed to get laid very badly.

We stopped at a few bars, where a few adventurous patrons allowed themselves to be bitten and slathered in fake blood. There were a few other patrons who did not acquiesce to such zombification, and they were much less exciting human beings. At a bar, though, I got a phone call from my friend L asking what I was doing.

“What are you doing?” she asked.

“Oh,” she said, with a pausing, “I’m at the Bowie Vs. Prince ride.” Bowie Vs. Prince. At another event someone had rigged up a mobile sound system and was leading around a mobile 80s dance party that was stopping at various open spaces for dancing and antics. Long story short- my friend was able to give me directions and I was able to successfully lead a pack of zombies to an 80s dance party. When rolled up Thriller was, rather auspiciously, playing.

It was a blast- we rolled out with 1999 blasting into the evening, getting “Woos!” from various bar patrons. There was also some bike polo in there. Eventually the whole mass of people ended up at a dance party on the water under a bridge. The next day L and I formed a scavenger hunt team, biking around Portland taking pictues of cycle-themed curiosity.

The whole zombie/80s music/mobile dance party thing, though, made me think a lot about “hipsterism.” At their worst (and most people do talk about them at their worst) hipsters are shallow, image-obsessed douchebags who are only capable of interacting with anything after a safe cushion of ironic distance has been established. At its worst, “hipsterism” is alienating, cold, distant, grating, and fickle. The word “douchebag” is often appended to “hispster” for good reason.

At their very best, though, the young, creative population of a city like Portland is absolutely fantastic, a population that is not afraid of audacity or bold actions. They are a demographic that does have a particular “style” but there is a distinct lack of “one-true-wayism” to it. While things are recognizably “hipstery,” there is a definite pluralism to what can be incorporated into that aesthetic. Almost anything, if presented with a certain sensibility, is considered stylistically interesting, which I quite like.

Also, in answer to any complaints about insufficient illustration: I was having too much fun to bother with pictures. There were costumes, antics, and music, enough that I entirely forgot that I’d brought a camera.

This entry was posted in Athletics, Horror, Music, Portland. Bookmark the permalink.