Puttering around Sunday morning, I thought to myself, “Well, I could sit on my ass and listen to economics podcasts, or I could go snap pictures of crazy shit at the gay pride parade.” I like to think that in my own internal brain-battles, I tend to err on the side of “crazy shit.” I pried my eyes and ears loose from the internet, took a shower and hopped on my bike. I found myself behind a rather butch array of women on mountain bikes and thought “Yep, I’m going in the right direction.” Downtown was overcast but not dreary, warm but not sweat-inducing. All in all, a good day for it. 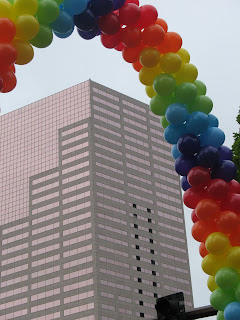 I found myself near the start of the Parade in Portland’s nicely green South Park Blocks. A brass band was playing a song I vaguely recognized but couldn’t really place. Once it got to the chorus I recognized it as Dancing Queen, and smirked with recognition. The crowd and participants did not disappoint. Sure, most of the people were just holding signs and waving and such, but there was no shortage of weird costumes makeup. The gentlemen below were not extras from Amadeus, but rather on a float promoting affordable housing. 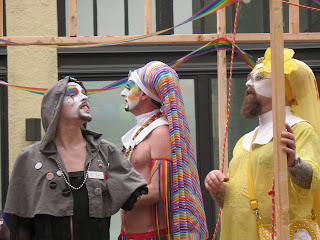 This guy was waving around a sword and shouting “God save the queen!” a lot. I have no idea what he meant by that, but the atmosphere was only improved by having a Don Quixote show up. He was waving that sword around quite enthusiastically, and I wished that I could have directed him to an obliging windmill. 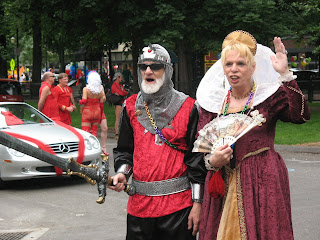 Inevitable political digression: There were plenty of people (like the folks below) who were parading about their own unrelated political agendas at the parade. I can understand why they’d do this- the liberal, open-minded population of Portland was out in force, and they wanted to both energize the base and target a demographic that would be more inclined to agree with them. 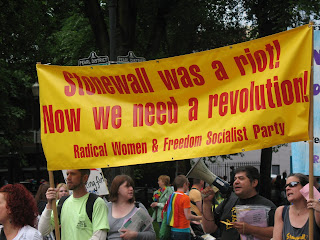 I found their presence, though, to be a little weird. The whole atmosphere of the parade was one of joy and liberty. Even though I’m not gay, I do appreciate what the gay movement has done for everyone. Because of lots of really dedicated people demanding respect, the field of what is sexually “legitimate” has been expanded for all of us. Even though there’s still a lot of work to be done with regards to reformatting the stupid bits of American culture, there was a general atmosphere of celebration and achievement. A lot has changed for the better, and we should really be happy about that. Oregon used to have a governor who was an out-and-proud member of the KKK. Now, Portland has a mayor who’s an out-and-proud gay dude. That’s real progress.

Hearing familiar angry shouts about how we need a revolution or whatever clashed with that feeling. I suppose the right has it’s own contingent who love being victims as well. In the midst of party-town were a bunch of people whom I think secretly love being “oppressed.”

But enough about the angry socialists. Check out this dude’s nipples! 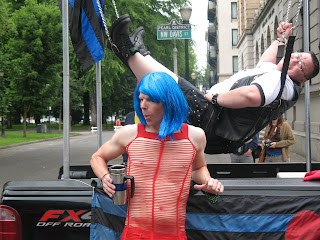 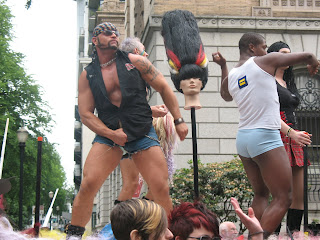 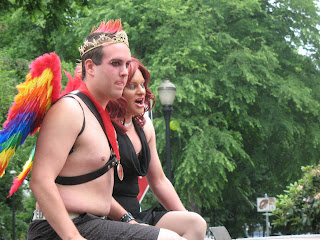 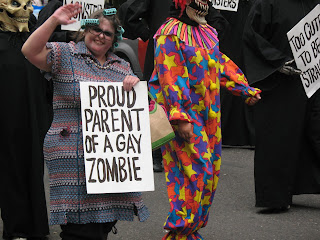 I found this group especially endearing, actually. It was gay parents and their kids, and for whatever reason, they’d decided to dress up as monsters. I like the idea that whatever someone’s aesthetic is, it’s welcome and legitimate. Whatever sort of style you’ve got (in this case “zombie”) is a potential catalyst for niftiness. This might sound trite, but I like aesthetic and stylistic pluralism. Seriously! Hooray for multitudes! Hooray for the varied panoply of people and stuff! Woo!

And of course, hooray for mostly naked chicks. Yes, most of them would want absolutely nothing to do with me or my filthy, filthy testosterone (unless some of them had unladylike anatomy that was not on display) but I found them visually appreciative nonetheless. Also, a rather tall drag queen told me that I was “beautiful.” I said, “Thank you, so are you!” I’ll take praise from all quarters. 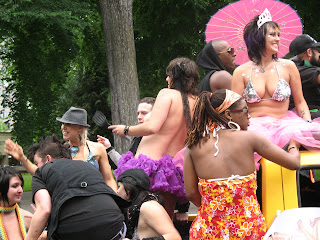 All in all, a lot of fun, and quite the display of awesomeness and drove home my admiration of Portland. Since I’ve been back, I’ve really come to appreciate this place, more than I was ever able to in high school, when I last lived here. I know that there are lots of other fun, liberal cities, but this one is mine. This place, this effusive and varied place, is my home. The next time I leave it will probably be for good, but in the meantime I’m immensely happy to find that my geographical parent is more awesome than I could have ever hoped for.

This entry was posted in Politics, Portland, Sex. Bookmark the permalink.