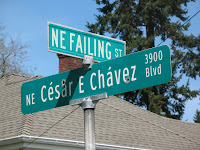 I like numbered streets. They are a force of good in the world. If, for example, you are looking for 32nd Ave, you would do well to look between 31st and 33rd. Easy, intuitive, and logical. Numbered streets are wonderful. Only slightly less awesome are streets that are in alphabetical order.

Portland, though, has decided that the beautiful efficiency of numbers is apparently a bad idea, and has started chipping away at this by renaming 39th Ave Cesar Chavez Blvd. Now, I have nothing against Chavez- but I mourn heavily the loss of number 39, an innocent number that really should be nestled in their with its little sister, 38, and its big brother, 40. Instead, the number 39 is now a restless orphan, wandering the streets alone and trying to sell matches, all the while slowly dying of consumption.

If we wanted to commemorate Cesar Chavez, then we should have used a street with a boring, prosaic, name. I think Grand would have been an ideal candidate. It’s a main arterial, not a numbered street, and has an entirely generic name that could suffer a bit of erasing. Instead, we got rid of a perfectly lovely number. As awesome a guy as Cesar Chavez was, he can never replace 39. No one can.

This entry was posted in Portland, Rants. Bookmark the permalink.