Portland, We Need to Talk About "Chinatown"…

Over the past year plus that I’ve lived here, I have found new reasons to love you. New areas of weirdness and wonder, new quirks and oddities to marvel at. You, Portland, are a tremendous place, and I routinely feel a swell of irrational pride at you being my native city. However, there is something that we need to talk about. Something that you could be doing better. No, it’s not the lack of bike lanes on Sandy Blvd., though that is annoying. Nor is it the eyesore that is SE Powell. I have every confidence you’ll clean those up eventually. No, what we need to talk about, Portland, is the couple of blocks downtown that you have decided to dub “Chinatown.”

Chinatown sucks, Portland. It’s more than a little embarrassing. I was recently in San Francisco, and took a stroll through that city’s Chinatown. I’d been there before, but it’s a fun neighborhood and I was with people who’d never been. I snapped a few photos. Here’s an example: 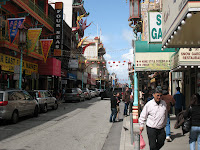 That’s not any particular landmark or a significant intersection or anything. That’s just a bit on the street. Nothing too unusual. Here’s another one: 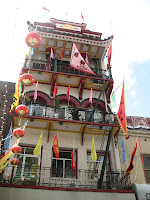 Again, that’s not a famous landmark or anything. I was just walking down the street, snapping away like an obnoxious tourist, and took a picture of that building. Pretty commonplace.

For contrast, here’s the House of Louie, one of Portland Chinatown’s most “Chinese” buildings. It’s kind of decrepit and sort of a sad sight: 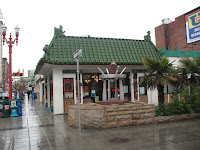 And here’s Royal Family Ginseng, right next door, abandoned. Someone papered up the windows, but now those brown sheets are peeling away, the markings of abandonment themselves disintegrating: 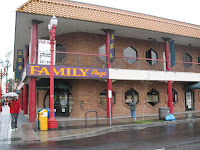 And that’s it, really. There are a few other “Chinese” type buildings, but that’s pretty much it in terms of what Portland has. Why the disjunction? Why does San Francisco have a Chinatown where storefronts and apartments are culturally distinctive and Portland has pretty much just a pair of crumbling buildings?

The answer is pretty simple- San Francisco’s Chinatown actually has Chinese people in it. The distinctive cultural flair of the area, the storefronts, tea shops, and restaurants, are all a product of the actual residents. Sure, they play it up for the tourists, but it’s completely possible to go into a dim sum shop and be the only English speaker in the place. San Francisco’s Chinatown actually reflects an immigrant population where they can get together, speak their own language, eat their own food, etc. As someone who’s been a stranger in a foreign country, I can totally see why such a place is necessary.

Portland, on the other hand, has a big gate, a bunch of red street lamps, and some rather dubious buildings. That’s about it. What’s missing from Portland’s Chinatown is, well, Chinese people. The are near Old Town is the official Chinatown, but there are a lot more Chinese people and businesses out on 82nd Ave. In the official Chinatown you can find hipsters, drunks, and homeless, but you won’t hear anyone speaking Mandarin.

So, Portland, here’s what I’m proposing: stop pretending. Stop pretending that we have a Chinatown, because we really don’t. We have a neighborhood with some red lamp posts, and that’s about it. It is a neighborhood that I really like, but it’s not reflective of an immigrant population, it’s not an enclave that Chinese people have made for themselves. I’m not saying we should tear down the big gate or anything, but we should all acknowledge that Portland’s Chinatown is, at the end of the day, complete bullshit.

This entry was posted in Portland, Rants, San Francisco. Bookmark the permalink.