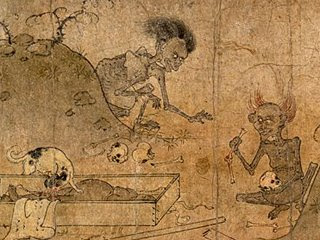 It’s Halloween, which is objectively the best holiday all year. It’s not nearly as stressful as Christmas, it’s sexier than New Years, and is barrels more exciting than Flag Day. It’s also the holiday where we’ll all be reminded how pervasive two of the most popular monsters are- vampires and zombies. I guarantee you that every single Halloween party you go to will have, at the very minimum, three people dressed as these things.
It’s easy to see why. Vampires are an excuse to dress up all sexy-like. Dracula and Co. have always been distinguished by their nifty clothes, deathly pallor, and sexy neck-biting business. That’s all well and good, but vamps are a tad overexposed. As for zombies, they’re a super-easy costume to do: just slosh some blood on yourself, and, boom, you’re a zombie. You don’t have to have a particular clothing style or anything; all you need is gobs and blood and maybe a bit of putrescence. Boom. Zombie. Done.
The great pantheon of other monsters, though, seem to be sadly ignored. Not just in terms of costumes, but in general. What follows are a few monsters whom I think are just as creepy as the popular dead guys.
Werewolves
Yes, I know. Werewolves are in everything. They were in Buffy and they’re in True Blood as well. The problem with the wolves, though, is that they’ve sort of become a foil to vampires. Every other bit of vampire media seems to set up werewolves as the natural enemy of vampires. The World of Darkness did this, as did Underworld, as did that horrible Van Helsing movie.
I’ve got no problem with the Wolves Vs. Vampire thing, but the raging furry dudes ought to have a chance to stand on their own. The werewolf is basically about how scary it is to flip out and lose your shit, giving into rage and emotion. That’s something worth developing. Instead, they’ve just been a beastie for vampires to fight.
The Phantom of the Opera
This another instance where the creature in question is pretty popular, but not used to his full extent. The Phantom today is best known for the Andrew Lloyd Weber musical, which establishes him as a romantic lead first, and deranged killer second. People tend to think of the musical before they think of Lon Chaney’s freakish and psychotic Phantom, if they think of that at all. This is a guy who’s grossly deformed, gets obsessed with starlets, and then hangs people for his own enjoyment. He could be right up there with the Frankenstein Monster as a freakish horror, but instead is viewed as being all romantical and misunderstood. Rightly, he should be viewed as the aristocrat-killing opera-haunting all around murderous badass that he used to be.
Entities From H.P. Lovecraft’s Mythos That Are Not Cthulu
Cthulu gets way too much attention. He’s everywhere- movies, games, t-shirts, toys. You can’t go into a comic shop without tripping over a bunch of tentacles. As much as I like Cthulu, though, he overshadows the other nasty elder gods that Mr. Lovecraft bequeathed on us- grotesque beings such as Shub-Niggurath, the Black Goat With a Thousand Young; or the King in Yellow, an eerie being who makes a memorable and hugely creepy appearance in The Dream Quest of Unknown Kadath. The big green tentacled dude has been overexposed to the point where he’s almost a parody of himself, but the rest of Lovecraft’s pantheon is still genuinely creepy.
Pretty Much Everything From Japanese Mythology

One of the better books of ghost stories I’ve read was Lafcadio Hearn’s Kwaidan. Hearn was one of the first Westerners to be nationalized as a Japanese citizen, and he loved the folklore from his adopted land. Most people now think that his wife, a Japanese woman, had just as much to do with the book as he did, but he was a dude, it was barely the 1900s, and his name was put on the book.

Anyway, the thing that I find sort of creepy about Japanese mythology is that there are a disturbing amount of stories where a guy marries a lady, and then the lady turns into an ice witch or crane or fox or some other variant, often abandoning her husband once he learns her secrets. One can play armchair psychologist and wonder what this says about Japanese culture, but the idea that beasties are actually in your living room rather than out in the dark woods is niftily squicky in a pod-people sort of way.

Hungry ghosts are also genuinely spooky. Vampires are supposed to illustrate the horrors of thirst, hunger, and general lack of satiation, I suppose, but anymore they’re way more about leather and sexy times than anything else. Hungry ghosts, dried out husks forever trying to satisfy themselves, seem actually damned.

Anything William Blake Ever Painted


William Blake is one of my favorite painters. He was also probably insane, and his paintings of scenes from Dante’s Divine Comedy are fairly creeptacular. Actually, paintings aside, he himself was probably pretty monstrous.
This entry was posted in Art, Horror, Japan. Bookmark the permalink.

One Response to Some Underrated Monsters