Night of the Living Naked Bicyclists 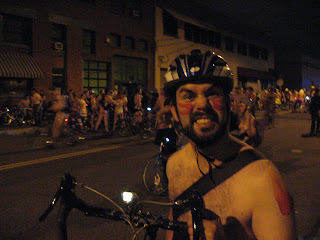 Yes, that’s me. In that picture I am wearing the following items:

-Socks
-Shoes
-A bicycle helmet
-A messenger bag
-Paint
…And that’s it. Saturday was the World Naked Bike Ride here in Portland, and I was not going to miss it. Last year, I learned of the event too late and wasn’t able to participate because I was playing Dungeons and Dragons. Yes, really. While thousands of other Portlanders were getting naked in the streets last year, I was playing D&D. (Though, it was a really fun D&D session…)
The Oregon constitution goes a bit further than the federal one with regards to protected speech. Because the World Naked Bike Ride is technically political speech (we were ostensibly there protesting oil dependence), the ensuing bike-mounted parade of butts, boobs, and saddle-mounted wangs were 100% legal. The police were out in force… corking traffic for us. Several of the cops waved, and one particularly enthusiastic officer of the law was throwing metal horns to the various naked cyclists.
This was the second time in my life that I’ve been naked on a bike, and just like when I got naked for a flaming lips video, it was pretty much entirely nonsexual. I’m not about to turn into some kind of ideological nudist, but damn it was fun. Lots of fun. Overturning social mores almost always is.
A steady crowd of onlookers had massed on the street, often with their arms out, high-fiving the participants. The naked participants, in turn, often shouted things such as “Take off your pants!” to the crowd. Amazingly, some of them did. There were more than a few naked onlookers, most notably a very well-muscled gentleman sitting naked astride a motorcycle and giving everyone a thumbs up. If there ever was a potential cover for a gay metal album, he was it.
One of the bums I recognized from Old Town also decided to get naked, and there, on the side of the road, he was wearing nothing but dirt whilst bouncing up and down excitedly. I could have gone the rest of my life without seeing filthy bouncing hobo wang, but there it was. Also in Old Town a rather obnoxious frat-boyish sort of guy screamed “Where the titties at?” I thought this was sort of a curious thing to say given that titties were everywhere.
Like I said, overturning social mores is nearly always fun. The feeling of everyone getting together and saying “Hey, guys! Let’s temporarily operate using alternative social constructions!” is precisely the kind of thing that can make lots of people say “Woo!” It’s a refreshing reminder that things are mutable.
It was highly neat. If I’m in Portland next year, I’m definitely getting naked again.

A Most Satisfying Encounter With the Flaming Lips, a Horde of Very Nice Naked People, and a Giant Spherical Vinyl Fur-Vagina 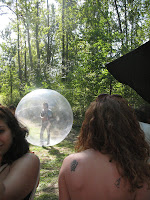 K posted it, and I saw the call up. The Flaming Lips were shooting a music video in Portland, on Mt. Tabor, and they needed naked bicyclists. This was too good to pass up. I am a bicyclists, and in a few moments I can easily turn into a naked bicyclists. I, along with my friend K, were definitely going to this thing. We met up, biked to Mt. Tabor, and sought out fame, fortune, and rock ‘n roll nudity.

I was not expecting Wayne Coyne to actually be there. I imagined that the whole project was going to be overseen by a director or producer with a pre-approved shots and images to capture. A limited amount of people, I thought, would be told where to stand and what to do, and it would all be very scripted.

I was utterly and completely wrong. Instead of some functionary that I’d never heard of overseeing the shoot, The lead singer himself was addressing a crowd of semi-clothed Portlanders and explaining the dilemma at hand. Earlier in the day, Coyne and the crew had been filming people riding down a hill on their bicycles entirely naked, as was the plan. The park ranger, however, had come by and told them that such absolute nudity was not an appropriate activity upon Portland’s mini-volcano, and demanded that everyone’s bums and junk get covered up. 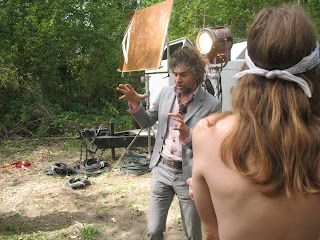 So, as K and I approached the crowd Coyne explained the solution: The next day the shoot would move to Sauvie Island, where full nudity would not be a problem, and there would be more space anyway. For the time being, though, he wanted to utilize the pretty environment. The solution: guerrilla nudity. On a more visible path, several people would be wearing underwear, there would be lights, and lots of whooping. It would all be a diversion, though, designed only to look like filming was going on. The real shot would be down below.

About twenty of us descended down a path for a shot of naked people pushing Coyne’s trademark hamster ball (which he calls the Space Ball) up and down a hill. “Okay,” he told us, “we have to do this quick. I don’t want anyone to get arrested or in trouble. When I say ‘go’ the underwear comes off, and as soon as we cut, put it on again.” We got around the big ball, pushed it around, and no one was completely naked for more than thirty seconds. It was still a lot of fun, but only a taste of the next day’s activities.

“Wow,” said Coyne after we’d pushed the ball up and down the hill a lot, “for a bunch of naked people you really don’t smell that bad.”

The next day’s shooting, though, was an entirely different matter.

The lot of us (and our bikes) bused out to Sauvie Island where Gus Van Sant apparently has a house and a fair amount of property, and the director, according to Coyne, was quite enthused about having his land invaded by a bunch of enthusiastic naked people. The house itself wasn’t all that opulent looking, but Van Sant has quite the enviable lawn, some nice woods, and a small beach at Sauvie Island. I could think of worse things to spend millions and millions of dollars on.

The day’s shooting consisted of a few main scenes- a longer shot of a mob of naked bicyclists, filmed on Van Sant’s sizable wooded driveway, more shots of people rolling the Space Ball around as well as us lifting it and Coyne above our heads and carrying it away. The main set piece of the day, though, involved another, similar inflatable ball. Except this one was covered in fur. And, it had a giant vinyl labia on the front of it.

Here’s a (NSFW) picture of it.

The whole album, Embryonic, is all about birth and whatnot, and the big idea of the video was that all of the naked people got shot out this giant spherical fur-vag and we were a bunch of reveling, newly-born primitives who encounter Coyne, a supposedly magical being in a crystalline Space Ball and we think that he’s special in some way or another. But, his Space Ball deflates, we see that he’s just another fleshy organism just like us, so, like any right-thinking group of whooping nudists we of course pull him from his deflated Space Ball, strip off his clothes, and then carry him off, subsequently stuffing him into the giant, hairy mother-vag that recently spat us all out. Very straightforward.

K, who was pregnant, said that the big, round fur-vag would proceed to dominate her maternal anxieties. 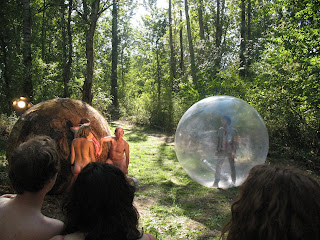 I was pleased to be among the twenty or so people involved in the birthing scenes, and even though I didn’t get to crawl out of the orb-shaped birthing fuzz myself, I did get to hoist a few people out of it. I can say, with a certain amount of confidence, that it was the first time in my life that I’ve ever hoisted naked strangers out of a comically large set of female genitalia. K, though, was fortunate enough to get spat out of the thing, which will probably be good practice for when she has to eject a smaller human from her various biological systems. (“I love it that you’re pregnant,” Coyne said to her, “it goes with the whole birthing, mother thing. That’s great.”) The feeling of the birth scenes was great, what with people shooting out of the giant vag and the rest of us whooping, hollering and generally carrying on in the buff. “Everybody freak out!” began to replace “Action!” as the directorial command of choice.

A bit on the nudity- I was sort of surprised at how non-sexual it all was. One would think that getting naked with a bunch of reasonably fit bicyclists would be an invitation for general bawdiness, but it seemed that everyone was trying very, very hard to not be pervy. I restrained myself from checking out the various highly attractive women too much, and in general the atmosphere was towards revelry and whimsy rather than lewdness.

There was more shooting of naked bikers, and towards the end of the day we did some night shots all carried Wayne Coyne’s naked body aloft over our naked heads. I was happy to be one of the guys hoisting him above the crowd, and can go to my grave with the knowledge that my hand has full on cupped middle-aged ass of the lead singer of the Flaming Lips, for whatever that’s worth.

The whole affair was easily the most naked people that I’ve ever seen in one location. Even after seven years in Eugene and attending Burning Man, I’ve never encountered that many bare asses in one place at one time. It was sort of freeing and relaxing, really, to just be standing around completely nude and not giving a shit. Not that I’m going to stop thinking that nudists are weird- they are. But, it was great to have an opportunity to do weird shit for a purpose. The crowd was fun, though, and I was impressed with how hands-on the Flaming Lips were with the making of their own video. It will certainly not be the product of intermediaries or a studio- it will be unequivocally theirs.

The video should be released sometime in the first half of October. Hopefully me and my ass will be in a shot or two.