The Idea of Los Angeles, Part Two, Wherein a City is Redeemed in My Eyes 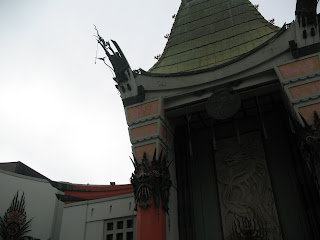 Up until I set foot on Hollywood Boulevard, I’d been enjoying my time in L.A. I’d had a fine time at the beautiful, art-filled Getty, and the grandly sleazy Venice Beach. The palm trees, gimmicky as they were, gave the place a recognizable sort of local character, as did the Spanish-inspired hacienda architecture. Other than lacking public transport, L.A. didn’t seem that bad.
Until I got to Hollywood, which was, easily, the single most disappointing tourist experience of my entire life.
Now, I’m all for the whole “be a traveler, not a tourist” type of sojourning. Walking down an unfamiliar street or sitting in an unfamiliar local bar or restaurant can be quite rewarding. One of the things that delighted me about L.A. was just being in a different sort of environment, taking in the buildings, people, and climate. Appreciating the change in latitudes, etc.
But, every so often, I like to have me a good-old-fashioned tourist experience. There is nothing wrong with going to a well-recognized landmark and saying “Woo! There’s the Golden Gate Bridge/Taj Mahal/Statue of Liberty/Big Ben/Great Wall! Wow! I’m actually looking at it right now!”
Mind you, I was warned. “Hollywood is kind of crappy,” said Seph, as we drove there. I assumed as much. I thought that it would be a row of shops and restaurants, and that would be about it. I had low, low expectations, and I was okay with that. Mainly, I was happy to be hanging out with a good friend in a new city.
Hollywood, however, did not meet even my low expectations. The place is an utter shithole. A depressing and despondent stretch of concrete. It is exactly the kind of place where beggars ask for weed instead of change. The shops along the way ply movie memorabilia and stripper boots, all the while bedecked with promotional posters and faded cardboard cutouts of Marilyn Monroe, Hollywood’s suicidal bombshell of a mascot.
The stars on the street are bland and undifferentiated. There is very little separating Jack Palance from, say Larry King. They are cracked and largely uninteresting, and resemble inexpensive headstones more than anything else. Ostensibly I was walking up and down a monument to art and glamor, but I felt nothing. The stars were generic and perfunctory. Even finding one dedicated to one of my heroes didn’t move me particularly much. 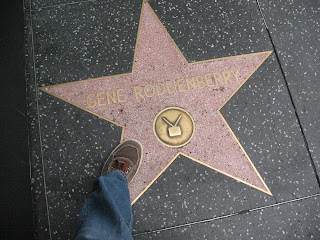 Yup, that’s Gene Roddenberry’s star, and that’s my foot on it. I was genuinely attempting to enjoy myself and find something to like about Hollywood, and hoped that Star Trek would fit the bill. I love Star Trek. To me, Star Trek is warm, wonderful, safe, cuddly, and comforting. It is like chicken soup combined with oatmeal, but not in a gross way. Star Trek is like an old friend who knows exactly what to say can totally make you feel better. If I ever have a kitten that gets caught in a blender, I will seek solace in Star Trek. If I ever am enduring a bad acid trip and start believing that the curtains are trying to eat my lungs, I’ll try to calm down with Star Trek. If I ever lose both my earlobes in a freak Cuisinart accident, I’ll try to cheer myself up with Star Trek.
Star Trek, however, didn’t really make Hollywood that much better.
Here’s another Trek-related picture. Again, this is me attempting to have fun. The Idea of Los Angeles, Part One 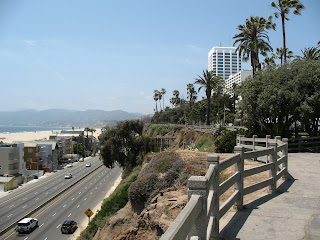 I’ve been to Northern California several times, and regard San Francisco as a sort of far-flung cousin of the Northwest. The same sort of ineffable Ecotopian vibe that I appreciate in Portland, Eugene, and Seattle pervades SF. The city is walkable and criss-crossed with mass transit, an air of palpable liberalness pervades the atmosphere. And (just like Portland) it’s filled with weirdos, hobos, and people on impractical fixed-gear bicycles.

My mental image of “California” is of the mostly-empty North- the Sierra Nevada and I-5, the vast area between Eugene, OR and San Francisco, CA. This image of California was unthreatening, boring, and filled with cows. San Francisco seems unjustly separated by its Northwestern brethren by these vast tracts of bovine-munched emptiness. “California,” to me, was equivalent to empty driving.
I had never been South. I’d never trekked below the Bay Area’s latitudes (at least not in California) and had never seen what went on in the tract of land known as “SoCal.” I had never seen so much of what feeds into the popular mindset of what is called “California.” In my head, however, there was an idea of Los Angeles:
A vast and undifferentiated city that can only be barely called a city. It is only a city in that many people are there. However, it has no center. A city must have a hub and axis, a point of communal recognition. There must be a beating heart within some ever-lively downtown area where something is always happening. I did not imagine this. I did not imagine a center to L.A., or things happening in L.A., or even the idea of walking through L.A.
My idea of L.A. was that despite the presence of millions of humans in a given area, a real metropolis had failed to take hold. The thing was massive but uncomplex- as if single-celled organisms had kept dividing and multiplying, but had never bothered to evolve. Sitting there would be an immense amount of undifferentiated biomass- heaps of cells but not a single organ.
That was my idea of Los Angeles. I’d gone down there to help Seph move from SoCal to Seattle. He’d been telling me to visit the city for some time. Finally, I did.
My first impressions of the place were poor. My rideshare from the Bay to L.A. was a woman who had what I found out was an Orange County accent. This surprised me. I think of regional accents as something that are just naturally going extinct, especially west of the Mississippi. When I imagine future English, I imagine it as neutral and unaccented. She and I had some confusion about directions, and immediately we got lost while I was on the phone with Seph, trying to find a spot to meet up with him.
Eventually we did, and he dragged me to his soccer game, which was held in a venue that was not at all apocalyptic, smog-choked, or otherwise despondent. One of his teammates informed me that people do, indeed, have real lives in L.A.
Seph, being a good host, was determined to show me the sights, such as they were. One site was Wilshire Drive which, he said, “kind of looks like a real city.” He was right. It did. There were skyskrapers and everything. Wilshire clashed with my view of L.A. as a spread-out unbuilt place. I was amazed. “Keep in mind,” he said, “this is really just the downtown area.”
The next few days would confirm some of my suspicions about L.A., though. It is extremely spread out, and there seem to be precious few options for public transportation. This boggles my mind. I do not understand how a city can be of appreciable size and no demand for competent public transit emerges. I know that I have been spoiled by Portland and Japan, but I think of public transit as something fundamental about cities. You have plumbing, electricity, and public transit. Otherwise, you’re just wallowing in barbarism.
Anyway, Seph took me to the Getty, which is nice. Very, very nice- if it wasn’t free you’d probably imagine that you couldn’t afford admission. The building itself is almost more interesting than the art inside- most of what I saw were some oils and impressionistic works that I didn’t really care for. (I think impressionism is boring. That’s right! I said it!) The view was more visually stimulating than any of the Monets, though. I found out that L.A. smog is very real, and various sub-skylines seemed to dominate the sprawl. Below the Getty, the vast city stretched out and various pockets of tall building occasionally poked out of the landscape. 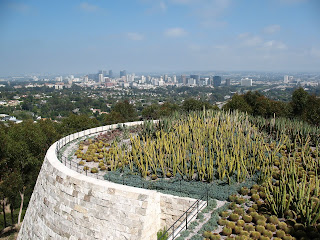 Strolling through the structure seemed to hammer home the idea to me that, yes, L.A. actually is capable of containing some rather nice stuff. For my whole trip there, I was trying to revise my idea of L.A. upward. I wanted to find redeeming things about it, and the Getty was certainly that. If you’re in L.A., go there. It’s a beautifully made building filled with green lawns and fountains, and it has some fairly neato art as well. 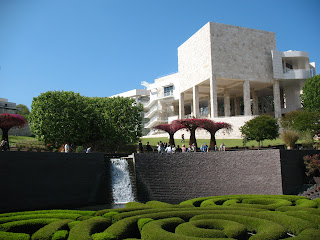 As were the palm trees, the hacienda architecture, and the various art deco buildings. After we went to the Getty, we strolled on Venice Beach and through Santa Monica. Venice Beach was surprisingly enjoyable. The place is sleazy, dirty, and weird. In a good way. It’s immensely touristy, but it seemed to be focused pretty well on a certain demographic. Pedestrians were redolent of tattoos, and it seemed as if every third storefront was selling, if not actual marijuana, something related to cannabis. 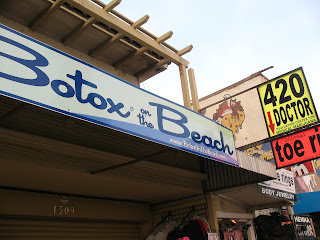 Or, you know, botox.
The stores selling bongs, pipes, and sophomoric weed-themed t-shirts did not really surprise me. What did surprise me, though, were the amount of medical marijuana dispensiaries along the way. Most of them had barkers outside, petite women holding signs shouting that “the doctor [was] in” and that you could “get yourself legal.” This, by the way, only bolstered my belief that medical marijuana as a cause is sort of silly, and we should stop kidding ourselves and just legalize it for recreational use. I sort of appreciated how blatantly the law was being bent. It made me feel like real change is going on.
In Santa Monica itself, I found myself revising my opinions of L.A. I enjoyed the smell of the ocean, the temperate climate, and the palms shifting in the wind. “The palm trees aren’t native, you know,” said Seph. “They were brought here in the forties as a publicity stunt.” I didn’t care. They were just… neat!
I experiencing something that could best be described as “fun.” Between the high-falutin’ Getty and nicely nasty Venice, I was beginning to get this idea that L.A. was a pretty alright place. Sure, the lack of public transport still seemed sort of fucked up, but my idea of Los Angeles and of California was spiraling upward nicely. 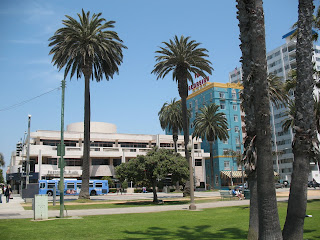 Until I got to the misery-inducing belt of disappointment known as Hollywood Boulevard.
Fuck Hollywood.