I am working on a rather extensive post about Burning Man, but before that, here’s a picture of me with a shaved head and beard. I like having a buzz cut, though I’ve only had it this short once before. Also, the beard is longer than the head fuzz, which is a bit odd. I don’t know if I’ll keep the beard or not- quite frankly, I think I look a little older (and vaguely pirate-like) this way.

This drastic measure was undertaken because prior to this, I had a rather nasty mohawk that I needed to get rid of. My hair was standing up on top of my head, and I had a few curved stripes in the fuzzy sides of my dome. It was neat for Burning Man, but I didn’t want to look too much like a Road Warrior extra whilst walking around Portland. 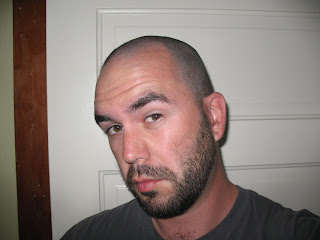