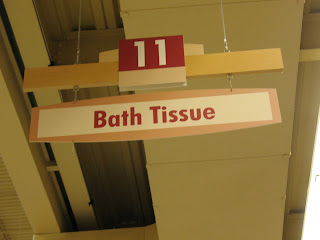 I’d seen this before but never really thought about it. Fred Meyer, it seems, is politely refraining from using the dread phrase “toilet paper.” Their in-house brand does the same: 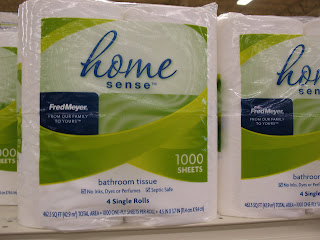 Okay, technically it says “bathroom tissue,” but it’s basically the same thing. I got to wondering if any of the brands of toilet paper in my immediate vicinity actually proclaimed what they were- paper that you use after going to the toilet. I looked about and did not see a single one. Not one brand of toilet paper actually used the words “toilet paper” on their packaging. Instead, there were lots of pictures of cute puppies: 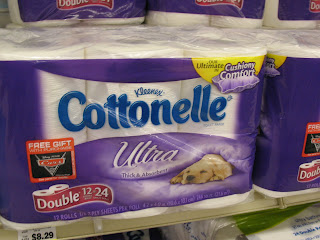 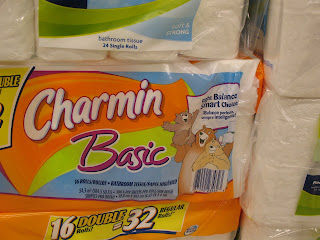 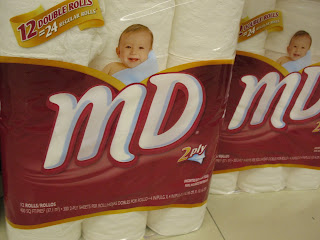 The entreaties to softness, light, and general distance from things excremental even extends to invocations of the celestial on packaging. Juxtaposed, of course, with a baby: 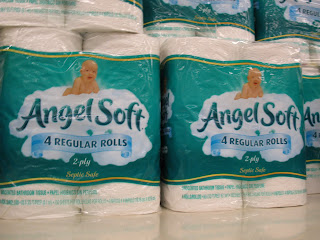 I looked around for some kind of generic or earth-friendly brand that maybe dared to call itself by its true name, but found not a one. The only copy I saw was that recalling softness and, sometimes, absorbency. I wasn’t put out by this because I think that “toilet paper” is the most fantastically well put together diptych of words in the English language- I simply appreciate honesty. No one says “I’m going to pick up some bath tissue,” or “Hey, sweetie, pick up some bath tissue on your way home,” or “Crap, guys! We’re out of bath tissue.” No human talks like that. We all call it toilet paper, but the aisles and packaging assume that the general population are too demure to be assaulted with such vulgar words.
In The Unbearable Lightness of Being Milan Kundera said that kitsch is the denial of shit. He meant that literally. Denying that certain gross biological things happen to us is a form of intellectual laziness and naivete. I’m inclined to agree with him, and it seems that the most shit-denying place on earth, the kitschiest piece of real estate in existence, is the toilet paper aisle.

“You do realize,” said the HR woman, “That you’re very qualified for this?” The statement annoyed me. Yes, I realized that I was “very qualified,” by which she meant “overqualified.” Yes, I knew it would be a pay cut compared to what I was used to, yes, yes, yes.

“You do realize,” I wanted to say, “That there’s a giant fucking recession out there? Right?” I didn’t say that, though. Instead, I held my tongue and got a seasonal job at Macy’s, America’s Department Store. I was a teacher, once. Now I would sell pants and blenders and underwear and neckties.

Training was insultingly slow. I wanted to simply say, “I have done retail before, and I can see that your proprietary computer system is very intuitive. Can I start working now?” But, I had to slog through it anyhow. “A lot of people don’t have jobs right now,” I thought to myself, “a lot of people don’t have jobs…” (Echos of “There are starving kids in Ethiopia! Now clean you plate!” I don’t think my parents ever said that to me, though.)

My job is in Beaverton. The commute is long and I wish I could read on the bus, but I get motion sick. I listen to podcasts and music instead. The commute is the worst part of the job, in it’s own way. If I was going two hours to teach or do something meaningful, I wouldn’t mind as much, though.

I bought a black suit so I could work there. The dress code is black, all black. I know this makes us easier to identify for customers, and for security cameras.

We are supposed to sell the Macy’s credit card. I don’t feel comfortable selling a financial product that I don’t know the details of, so I haven’t bothered to push it. I exceed all my sales goals easily, but as far as I’m concerned the credit card can go fuck itself. They tried to get me to get one, and I said no. I don’t have any credit card debt, and I’m not really in favor of it generally.

Most of the time when people ask me questions about products, I just read them the labels on the products. “Is this dishwasher safe?” they ask. “Yes,” I say, reading the label that says so, “it is.” “Thank you so much,” they say, and then I ring them up.

Selling is easy. Lots of people just want to be reassured.

I wish our Macy’s has a Santaland. It doesn’t. Santa’s out in the mall, and there’s just a line up to his chair. He’s near the food court.

I talked to a woman who said this job was a ninety percent pay cut for her. I felt sorry for her, but I also wondered where all of her savings or whatever went.

Vendors from companies like Waterford, Calvin Klein and Calphalon are sometimes in the stores. One of them said to me “They treat you seasonal guys like shit,” and then apologized for swearing. I told her it was okay.

I was scheduled to work on Christmas Eve, and talked myself out of it.

There are no religious Christmas songs. I like those songs much better, usually. I like Oh Holy Night, Oh Come, All Ye Faithful, and Joy to the World. I like them all, and they are never, ever played.

They do sometimes play the theme from A Charlie Brown Christmas, though, and I like that.

Macy’s in Beaverton is part of a mall. I wish I worked at the downtown store. At that store, I could pretend that I worked at some classy joint in the heart of Portland. Instead, I work at a mall.

The mall would be okay if it had a bookstore to hang out in on lunches and breaks, but it doesn’t.

It does have two Starbucks’, though, and I often get coffee there. I don’t like saying “tall” or “grande” because I think it’s sort of silly so I’ll say something like “Can I get a twelve ounce coffee please?” “One tall coffee? Sure!” is a common reply. I don’t like hearing grown up people having to talk like that.

A guy behind me one day is laying it on thick “Thank you so much for shopping with us!” he says, and I want to punch him in the mouth. I’m always polite, but he’s obsequious, parroting all of the things in the training videos. I like finding real people in retail establishments, and he was a total Caufeldian phony.

My girlfriend drove me to work one morning and brought me coffee. I was touched, but also a little embarrassed that she saw me on the sales floor. Part of me doesn’t want anyone I know or respect to see me doing this.

I asked to stay on after Christmas. I don’t like it, I’m overqualified, but, yes, there’s a giant recession out there. A lot of people don’t have jobs… 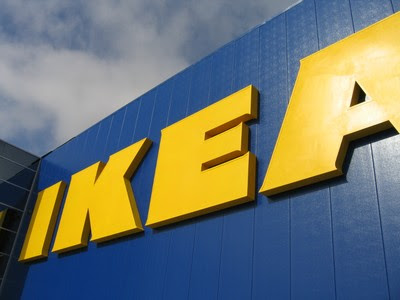 Until recently, until that fateful two days ago, I had only heard of “Ikea” in rumor and hearsay. The furniture and furnishings, yes, those were familiar, but the interior of the blue-and-yellow (if you go cross-eyed, it’s green) store remained terra incognita. I’d heard stories of it. Travelers’ tales and legends, songs, lays, and canticles. The bards spoke of the Fountain of Youth and Fantastical Beasts. Dragons of ferocity and terror were said to lay within its caves, and Ikea’s storied glens and forests were thick with Unicorns and creatures of Faerie. I knew not what lay in store (in this store) for me, as I set out in my gilded chariot (by “gilded chariot” I mean “my girlfriend’s Volvo”) for a new land of wonder and inexpensive modernist furniture.

Ikea, so long rumored, did not disappoint.

Stepping into the display rooms I was immediately impressed by how everything was, first and foremost, contextualized. Ikea does not start by showing you aisles, boxes, or even displays of buyable merchandise. Before any of that, it puts you in the right mood, it romances you properly. Most furniture stores show you goods in a manner that is totally divorced from how the merchandise will look in real life, i.e., you see a couch and it’s in a row with a bunch of other couches. Or, there’s a chair displayed on a pedestal, with nothing else. Such methods of display are utilitarian, perhaps, but they are not natural. Ikea’s strategy, though, is to show its merchandise off in idealized domestic settings, to put its chairs, tables, and sinks in the sexiest contexts possible, and it works. Before I was able to pick up or handle anything buyable, the display rooms got me good and ready with a heavy dose of mercantile foreplay, and boy, did I appreciate that.

The displays were aspirational, inspiring, and, best of all, I could relate to them. Unlike so many catalogs and architectural advertisements that feature heavy furniture that costs more per pound than I do per hour, I could actually see myself assembling these bits of particle board and screws into a delightful modern living space. I had been located, demographically, and hopelessly seduced. Gazing upon the desks and tables and beds and curtains and television sets and spatulas I couldn’t help but enjoy myself. My girlfriend referred to it as “recreational consumerism,” and, yes, that was the perfect word for it.

Stopping for lunch midway through the excursion, I couldn’t help but order the Swedish meatballs. There was no other option, really. The meatballs were too distinctively Ikean to pass up, too much part of the idealized experience. They were small and distinctive, manageable and delicious like so much of the merchandise that the store offered. Gravy and all they were wonderful, and I looked at a picture of Stockholm on the wall.

By the time Ikea hits you with the part that looks like an actual store, the part where you get a cart and put things in it, you are raring to go. You want it. You’ve had your aspirations piqued and sweet nothings of consumerism whispered into your ear. Ikea has suggested and shown to you all that it can offer, all that can be yours. You want to stroll through the housewares section, inserting things into your cart with capitalistic abandon. “I don’t know what this is,” one of us would say, holding some kind of houseware or domestic gadget, “but I get the sense that it’s somehow useful. I want to do things with it!” Indeed. I did manage to control myself, to not buy a shoulder bag that I found useful-seeming, but the final part of the store has you wanting to recklessly consume, and things that seem like large purchases look like impulse buys under Ikea’s seductive spell. By the time I handed over my debit card (I bought a nicely inexpensive dresser, by the way) a wave of relief and satisfaction coursed through me, fantastic release.

The next day I opened my new box of furniture, and got to relive a bit of the Ikea experience as I assembled my new furniture. (I’m even actually reorganizing my room.) That’s what Ikea has going for it, and that’s why it’s great: It offers an experience. Most of the time when I’ve bought something, I think little of where I got it, and mostly I just want to get home with my purchase. Ikea, though, has managed to make itself a kind of theme park, a sort of temple that is a font of affordable and neat-looking things. You can’t really say that about anywhere else. I’ll stop, before I start sounding too much like Ikea’s bitch.

I will simply say: Ikea, you sold me furniture, took my money, and I liked it. You win at capitalism. Congratulations!