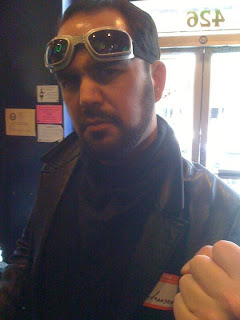 That is a picture of me dressed up as my villainous alter-ego, the Defenestrator. His superpower is throwing people and things out of windows. I didn’t crack out the leather and goggles on my own, though. The getup was for a pub crawl hosted by the Alter Egos Society, an organization in Portland dedicated to, well, dressing up like superheroes and supervillains. This last weekend several of Portland’s enthusiastic geeks donned crazy clothes, took on the persona of characters of our own devising, and cavorted throughout town.

Now, why the costumes? Why not just go on a regular pub crawl? Why not just get a bunch of people together and have a night out? That’s possible, certainly, but dressing up in crazy clothes gives it an extra amount of specialness, of awesome-osity.

Costumes are an outlet for creativity

There were some fairly impressive getups on display, from a quartet of horn-sporting demons to a mad scientist character who had an extremely impressive metal mask. I myself worked a bit on a logo for the Defenestrator that I appended to the back of my jacket, and settled on a distressed-looking down arrow that suggested dramatically crashing into the ground. (Several people asked me “Are you supposed to be the economy or something?”)

While it’s perfectly possible for me to go to an art store and load up on canvas, charcoal, and fixatif any time I want, knowing that I was going to attend a themed pub crawl gave me a reason to start scrawling out a symbol for my own fictional villain. Having a reason for something, a deadline, and looming event fires the productive imagination much more than most things.

Costumes are an instant conversation piece

While I can occasionally get pretty extroverted, it is still sometimes difficult to start conversations with strangers. I found myself talking to plenty of people I didn’t know, though. The demons I mentioned earlier- they’d rigged up pitchforks that shot flames out of the end, and of course several of us started using them to light clove cigarettes. Socializing ensued. People commented on my leather pants, I talked to a guy who happened to be wearing an “Ike and Nixon” button, and briefly chatted with a man in a luchadore mask. All of these interactions were smoothed by the presence of weird clothes. “Dude, awesome costume!” was an instant conversation topic.

A friend of mine was dressed up as an evil mastermind he called Lord Skullfucker. Now, he’s normally a pretty demonstrative guy, but got no shortage of joy talking about how he was going to initiate amorous relations with various peoples’ ocular cavities. Likewise, my girlfriend was dressed as the deadly and beautiful Rocktopussy, and found herself voguing and striking David Bowie poses much more than she normally does. A guy dressed up as an 80s metal themed hero kept flashing the horns, and the various heroes and villains pretended to hate each other to amusing effect.

With crazy costumes, you can try on not only clothes, but a whole other bombastic and weird persona that you wouldn’t use in real life. I know this is a bit of a cliche, but it’s wonderful to see in action, with folks trying on personalities to go with their new tights and masks.

It’s fun to freak the mundanes

Obviously, not everyone in Portland was dressed up in crazy duds. There were plenty of perfectly normal people out and about, and we got a fair amount of stares. Most of them were very appreciative, and several cars honked in support of our wackiness. Of course we waved back. Several onlookers from the Portland Streetcar pressed their noses to the glass of their vehicle as we walked by, and we responded with waves and whoops.

I’d venture a guess that most of them later told their friends “Hey, guess what I saw!” and we managed to improve their evening, just a little.

Weird stuff is a source of civic pride

This is probably specific to Portland and cities like it, but I’m quite grateful that I live in a city where quirky stuff happens on a fairly regular basis. The evening before I dressed up a the Defenestrator, I’d been playing extreme mini-golf. This weekend I’ll probably see the mayor of Portland dressed up a robot. On Sunday, there’s roller derby to be seen. Say what you will about Portland being self-consciously weird, it’s not boring.

Of course Portland has other events like this. There’s a pirate themed pub crawl. And the one where everyone dresses up as Santa. I hope to be at both, filled with joy at living in one of the funnest towns ever.

This entry was posted in Awesome Things, Portland. Bookmark the permalink.