The Best and Worst of America, All in One Morning 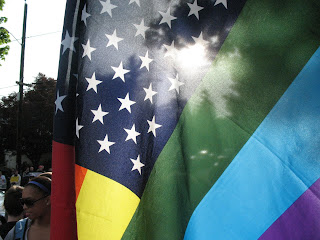 There were only five of them.

Just this morning the infamous Westboro Baptist Church (a.k.a. the “God hates fags” people) protested Portland’s Grant High School. Arriving there, I could see why they chose the location- the entrance to Grant is large and dramatic, columns rising up over greenery and stairs. The street in front of it is wide but not busy, accessible and easy to find but not excessively choked by cars. The setting was an idea potential publicity place.
The five of them, a middle-aged man and women, along with three younger men who looked to be either in their late teens or early twenties, held two signs each. One of them read “YOU ARE ALL GOING TO HELL” and another said “FAGS DOOM NATIONS.” Of course, there was one that simply said “GOD HATES FAGS” and another proclaimed Obama to be the Antichrist. I wondered if the five of them were all related to Fred Phelps, the leader of the church.
This was the worst of America, a fanatical cultlike hate group. This was a vile and utterly morally bankrupt display. This same group also pickets the funerals of people who have died of AIDS, frequently desecrates the American flag and declares the U.S. to be a “doomed,” and also holds hateful signs outside of Jewish institutions. They are (and I use this word sparingly) evil. I don’t use that word for a lot of people, but I think that if you are heartless enough to disrupt funerals, blame Jews for crucifying Jesus, consign nearly all of the U.S. to hell, and all the while believe that God is on your side, you are most certainly evil. Crazed, arrogant, and twisted.
But there were only five of them. There were hundreds of us. 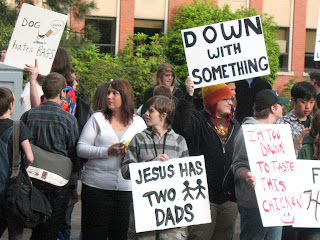 A whole crowd of counter protesters massed in front of Grant High School, carrying signs and banners, playing guitars and drums, singing and chanting. There were high school students, weirdos, old people, geeks, and priests. Some of the signs were serious, but most were whimsical and odd, proclamations of nonsense and internet memes. People were there to protest, but they were also there to have fun. 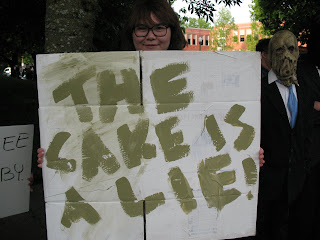 This is better than simple resistance. My generation, for the most part, believes in equality. We were raised learning about Marting Luther King, Jr., we were born well after Civil Rights, Women’s Lib and the first gay rights movement. For most of my generation, people in their twenties and thirties, equality has simply been part of the air. Of course we believe in civil rights. Of course we’re against discrimination and prejudice. It is, anymore, common sense. To rail against it is absurd, and it was answered with absurdity. 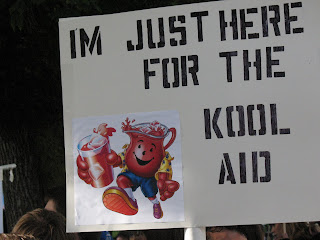 Again, there were five of them, and hundreds of us. The crowd, rather than being angry, was gleeful. At one point, everyone started singing the Barney theme song (“I love you, you love me…”) and then This Little Light of Mine. That was followed by The ABCs. Grant students milled through the crowd holding cans asking for donations for “The Grant High School Gay/Straight Alliance… and irony!” I gave them a bit for irony. 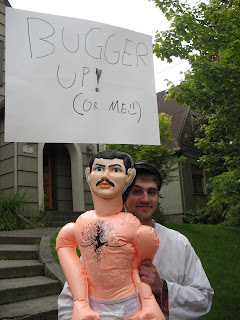 Someone had a portable stereo and the familiar lyrics “Never gonna give you up…” blared through it. The crowd said “Woo!” and started grooving to Rick Astley only half-jokingly. Cars drove by, most of them parents dropping off their high schoolers, and waved to the crowd, tooting their horns in support. 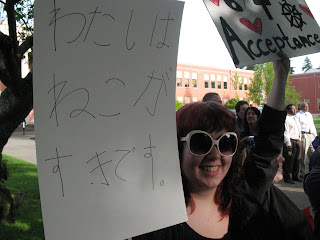 (Her sign says “I like cats,” by the way.)
Would it be better to ignore the Westboro Baptist Church? Maybe. If you see a crazy street person ranting to themselves, it’s usually best not to try to dissuade them of their craziness. They’re too far gone. However, the counter protest wasn’t about persuading the Westboro Baptist Church that they were in the wrong. The crowd was more there in solidarity, and it turned into something of a party, a huge pre-work get-together. People were having fun. That was what the WBC accomplished today- I doubt that they persuaded anyone that God actually hates fags, or that anyone is going to hell. What they did do, though, was act as the impetus for a good time, a fun occasion of playful nonsense. 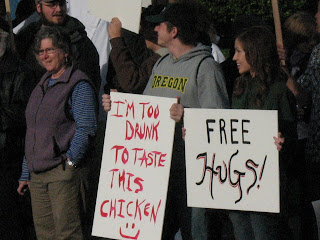 I don’t fear for America. This is a country that’s produced a fair amount of awful things, but we’ve also pushed back. Gradually this place has gotten better. Yes there are still nasty things like the business in Arizona going on right now, and yes we have a long way to go, but things are mostly going in the right direction. I really believe that. 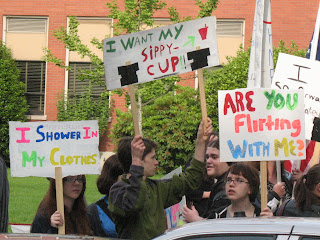 Fifty years ago we had segregation, and now the president is black. Fifty years ago sexism was the norm, and now a(nother) woman is going to sit on the Supreme Court. Fifty years ago homosexuality was considered a psychiatric disorder, and now Don’t Ask, Don’t Tell is in the process of being repealed. Would the crowd in front of Grant have been there fifty years ago, enjoying themselves in the streets, all in the name of equality? Probably not. But because of the wonderful evolution and adaptation that this country is capable of, we were there. 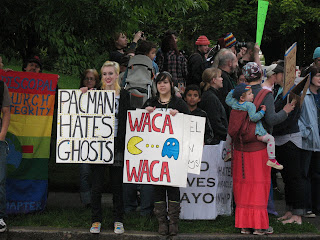 It is tempting to despair and say “fuck it,” to point at incidents of nastiness, ignorance, and regression and just write off the country as doomed. That’s a cop-out, though. That’s ignoring responsibility. I’m not there. I believe that one of the best things about America is that it has the power to grow out of its awfulness and become something better.
It has become a place where there were five of them and hundreds of us.
This entry was posted in Politics. Bookmark the permalink.

2 Responses to The Best and Worst of America, All in One Morning