May First, 2010: What I Think About Legalizing Marijuana

On May first, the unofficial holiday of protests, of demonstrations, of signs and shouting and slogans, was in full swing in downtown Portland. I was somewhat conflicted- that Saturday was also Free Comic Book Day, and the geek in me wanted to bike around town to the various shops and get all of the free books that I could get my hands on. I did go to two shops, but my political curiosity got the better of me, and I spent most of the day in downtown Portland.

In Pioneer Courthouse Square, a very specific kind of music was playing, a certain slack-sounding rock, a loose, unconstrained music that immediately brings to mind tie-die and unkempt beards. Several tents were set up in the square, many of them selling glass pipes, hemp crafts, and other marijuana peripherals. The whole event was dominated by NORML (National Organization for Marijuana Legalization) and a not-unfamiliar vibe of hippie rhetoric and low-level outrage dominated the event. The police, of course, were milling about diligently. 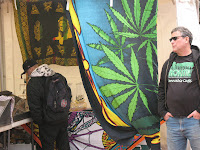 A speaker took the stage, and began to speak about the alleged virtues of medical marijuana, and declared that the U.S. was denying sick people medicine to which they had a right. The medium-sized crowd responded favorably, applauding and whooping, all the while milling about, signing petitions, and looking at pipes. The speaker went on to extol the various virtues of marijuana, its safety and supposed health benefits, the economic rewards of turning it into a legitimate crop, etc. I have to admit, that the rhetoric coming from the stage made me more than a little uncomfortable. 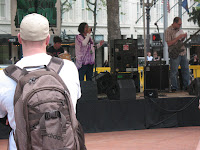 I am in favor of marijuana legalization. More specifically, I’m in favor of recreational legalization, and believe that moderate use by responsible adults is fine. I have no moral opposition to the drug, and an generally a civil libertarian when it comes to what people should be allowed to do with their own bodies. I think that legalization would be a fine thing, and will probably come about in the next twenty years or so.

Nevertheless, the rhetoric in the Square on May first made me a bit squeamish. I believe that there were a few reasons for this:

1- While I don’t doubt that marijuana has some pharmaceutical benefits in specific cases, I can’t help but wonder if advocacy of medical marijuana is a fig leaf for recreational legalization. Actually, I think that this is the case more often than not. Pretending that marijuana is some kind of panacea or essential medicine being denied to sick people makes me very skeptical. There are several depressants and opiates already available to the health care industry. I would rather have honest advocacy of a recreational drug, rather than dressing it up as a medical necessity.

2- I do not like it when cannabis advocates call marijuana “safe.” It is true that it is relatively safe, compared to, say, cocaine or heroin. To classify marijuana as the same kind of narcotic as these drugs is absolutely ridiculous. However, it is still a drug, and still entails a certain amount of risk. Drug consumption is always a managed risk, and it is a risk that individuals should be allowed to take. Moreover, just because something is unsafe, it can still be managed. I would not pretend for a moment, for example, that driving is perfectly safe, or that whiskey, traveling, or sex are safe. However, all those things are worthwhile, and the benefits outweigh the risks.

3- Marijuana advocates do not seem to anticipate the economic changes that legalization will entail. The speaker in the square repeatedly mentioned everyone “growing their own marijuana.” While I have no doubt that this will happen, she and others like her seem very naive about how marijuana will be commercialized almost as soon as it is legalized. I believe (but cannot prove) that the various tobacco companies privately hope for marijuana legalization. They have the infrastructure already to manufacture and distribute smokables. I truly believe that RJR Nabisco will be selling joints as soon as they are legally able to. This does not seem to occur to many legalization advocates.

4- Enthusiasm about drugs generally makes me uncomfortable. I am not by any means a puritan (in opinion or behavior) but I think that many people mistake the easement and momentary satisfaction provided by drugs as a substitute for genuine enlightenment. I believe it was in Heaven and Hell where Aldous Huxley after (I think rather unevenly) extolled the virtues of hallucinogens, referred to the experiences they offered as a “gratuitous grace,” a momentary glimpse of supposed understanding, as opposed to the thing itself. I do not doubt the feeling of relaxation that comes with, for instance, a frosty beer after a work day, but I would not mistake that for genuine psychological well-being, the ability to be at peace in the midst of chaos. Genuine existential satisfaction comes from an array of experiences that cannot be readily obtained.

Given all that, I did agree with the protesters about their policy prescriptions- that marijuana should be legal. However, I did not feel a real connection with them, did not see myself as part of their “team.” I will vote with them, but I am not of them.

This entry was posted in Politics. Bookmark the permalink.

2 Responses to May First, 2010: What I Think About Legalizing Marijuana