In Which I Probably Read Too Much Into Dirty Harry 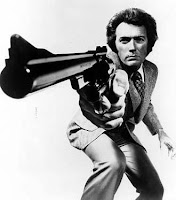 I recently watched Dirty Harry for the first time, which had since then been something of a hole in my pop-culture education. I enjoyed the movie, but found its politics to be somewhat objectionable.
To briefly sum up the film, Harry Callahan pursues and catches the Scorpio killer, a serial murderer who uses a sniper rifle, through San Francisco. Scorpio is let loose after his release, though, because the district attorney say that Harry didn’t inform the suspect of his rights, that he violated multiple sections of the Constitution, and that all of the evidence that Harry obtained was done so illegally.
The scene in which Harry is informed by the district attorney that there is no way that the authorities can bring a case is preposterous. If anything, a district attorney passing up the chance to put away a serial killer seems highly improbable. The chance to lock away a high-profile sicko is the career-making move that most DAs probably dream of.
However, the prospect of realistically portraying the civilian authorities (along with the DA, the police chief and the mayor are portrayed as similarly toothless) is not Dirty Harry‘s project. The film goes out of its way to portray such authorities as weak so that Harry, by comparison, may appear strong.
Dirty Harry posits that the warrior caste of a society may second-guess the civilian authorities. Not just may, but should. Harry’s decisions are portrayed as wiser, braver, and more socially responsible than those of his police chief, the district attorney, or the mayor.
A democratic, civilized society means that the state retains a monopoly on force. Force is controlled, regulated, and not used lightly. Private citizens may not initiate force- they may only use it in self-defense. Indeed, the state may not display aggression, either- it may only use it in a situation where the larger ends of society are served by the judicious application of violence.
Those who apply violence for desirable social ends do so at the pleasure of civilization at large. The police and soldiers who may engage in violence do so in a context where they are ruled by civilization. It is most decidedly not the reverse. The warriors do not rule in a democratic society. (Hence the hooplah some years ago about W. wearing an Air Force jumpsuit. Presidents, even if they have served in the military, traditionally always wear civilian clothes.)
Dirty Harry posits that the mechanisms of democracy are fundamentally broken, that the safeguards of law and order, the rights embedded in the Constitution, are deterrents to justice. In Dirty Harry, the implication is that if San Francisco really wanted to catch the Scorpio killer, if they were serious, then they would not go to the mayor, the police chief, or the DA. If they were serious, they would go to Harry Callahan and allow the warrior caste to call the shots over the civilians, not the other way around.
The stance implied by the film is a deplorable and socially irresponsible position, basically stating that borderline-sociopathic individuals such as Harry Callahan are necessary for civilization’s survival. The whole thesis of the movie reminded me of another famous speech, wherein Jack Nicholson’s Co. Jessup rationalizes his existence in A Few Good Men.

The scene above, though, is more nuanced because Jessup is explaining himself to other members of the military. A Few Good Men is essentially about members of the armed forces who conduct themselves as normal participants in a democracy rooting out and investigating those (such as Jessup) who behave as if they belong to an exceptional warrior caste a la Harry Callahan.

The polar opposite of Nicholson’s speech (and ideological sibling to Dirty Harry) is Team America: World Police. I’ve always found the final (NSFW) speech to be something like the opposite of A Few Good Men, and in it Trey Parker and Matt Stone seem to articulating something akin Dirty Harry’s thesis- that society needs a certain population of nasty, violent people in order to survive.

Though they admit that pussies are necessary, too. How big of them.

Make no mistake, I am not a pacifist. Not by any means. I don’t believe that we should dismantle the Pentagon or anything like that, and I find people who are reflexively anti-police to be kind of strange. Every contact I’ve had with people who’ve been members of the armed forces or law enforcement has led me to believe that those who are responsible for public safety are more or less normal people. I worked for the Department of Public Safety at the University of Oregon for two years, and none of the police officers I met (a few of which were former military) seemed nearly weirdly barbarous as Harry Callahan. My grandfather was in the U.S. Army, and while he had seen and participated in WWII’s horrors, he certainly wasn’t a monster.
Granted, the Dirty Harry is a bit self-conscious about how monstrous the protagonist is- the word “dirty” is right there in the title, after all- and I’d be lying if I said that I didn’t delight in seeing Clint Eastwood blow dudes away while glaring that steely glare of his. But, Dirty Harry tries to turn the pathologies of the main character into virtues; virtues that civilization supposedly needs in order to endure. We do need warriors, certainly. We need cops and soldiers and marines and fighter pilots. That is true. But we do not need monsters. We do not need Col. Jessup or Team America, and we certainly don’t need Harry Callahan to survive.
This entry was posted in Movies, Politics, Rants. Bookmark the permalink.