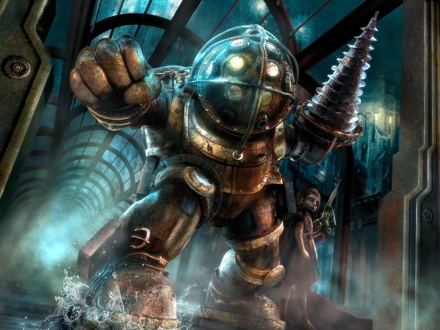 Of the various loves in my life, one of the most abiding and constant has been video games. I haven’t really blogged about video games at all. I never blogged about how much I love the Fallout series or how many hundred yen coins I spent in Japanese game centers. It’s a topic that I’ve avoided, semi-intentionally.

However, I’m compelled to gush about how much I love BioShock. Not that the series needs it- BioShock is a tremendously successful franchise and it doesn’t really need any more geeky adoration being spewed in its general direction. I can’t stop myself, though. I need to shout like a screeching fanboy. There is a big overriding reason why I love it so much, something utterly apart from the great gameplay, wonderful design, excellent writing, and creepy atmosphere. Those things are great. However, there is another, very simple reason why I love this particular FPS so much:

BioShock is a game about shooting Ayn Rand in the Face.

The original game is a refutation of Atlas Shrugged in video game form. Somewhat more importantly, though, it is also a satire of video games in general, and at the same time makes a point that could only be made in video game form. That’s what I really want to talk about. BioShock wouldn’t be what it is if it were a movie, book, TV show, or any other kind of media. It’s great because it makes the most of what it is.

Okay, spoilers ahead, everyone! For both games.

The First BioShock game is all about the hubris and failure of Andrew Ryan, a stand-in for Ayn Rand. Ryan built himself an undersea utopia that failed miserably. His vision was based on unabated individualism and constant nattering about “parasites” who spoil life for the shiny paragons of industry and brilliance.

BioShock is also all about the protagonist (you) gradually finding out about who the hell you are. At the beginning of the game, we see the main character in a plane that crashes into the Atlantic, and immediately assume that he’s just an ordinary, hapless survivor who happened upon the underwater city of Rapture. Much later, we learn that he actually hijacked the plan and caused the crash.

What’s more, we find out that the character has been manipulated the whole time. He has been under mental compulsion for the vast majority of the game, but you wouldn’t know it from the gameplay. At no time is control really wrested from you- you play BioShock as you would any other linear game. However, you don’t have any control about what the character will do. You do what you do because NPCs tell you to do stuff, and because you are led by the nose in a linear fashion.

It’s amazing because you are able to embody someone you know nothing about. You can’t see the protagonist’s face, can’t hear him speak, and know nothing, really about who he is. Yet you embody him and identify with him anyhow. Eventually you find out that what you thought was a bland, voiceless video game protagonist was actually a genetically manipulated zombie who had very little choice about his actions. The surprise of the big reveal could not have worked in any other medium.

BioShock 2‘s ending is somewhat less satisfactory- you find out that your daughter has been watching you the whole time, and that your actions have determined her character. I chose to be a nice, shiny paragon of goodness who helps people, so she, in turn, turned out to be an idealistic, sunny person. Apparently if you decide that you like killing and selfishness, your daughter turns out to be a kind of a bitch at the end.

I suppose that this is a pretty good approximation of parenting- you’re actually raising your kids all of the time, not just when you think they’re watching you. You know, like this:

Anyway, BioShock (both of them) are great video games because they take full advantage of the fact that gamers embody the protagonists, and don’t really think that much about whom they are embodying. At the end of the first one you get hit with “Guess what! You’re a juiced-up zombie bitch with no free will! How do you like that? Now, would you kindly kill Ayn Rand with a golf club?” The big surprise at the end of the second comes down to “I learned it from watching you!” wherein you discover that parents who mercilessly harvest Little Sisters have kids who mercilessly harvest Little Sisters.

In books, movies, television shows, comic books, or any other medium, the observer cannot slip into the protagonist’s shoes, cannot embody them. In video games, though, that can happen. BioShock allows you to embody characters that are not who you thought they were, or doing things that you did not think they were doing.

Gaming can put you in disorienting the position of not only observing actions, but doing them and not understanding them, with great emotional effect. It is something I would like to see more of. Rather than just games where players pursue goals for pasted-on reasons, I would like to see games that take advantage of this disorientation that comes from character embodiment. The only other video game that I can think of that has effected me as much as either of the BioShock games has been Silent Hill 2, wherein the protagonist wades his way through the shadowy world of love and uncertainty that is husbandhood. (Given that I was living with my girlfriend while I played it, it kind of hit a nerve.) In all cases, my emotional reaction came from the fact that I did not just watch the drama happening, but had to deliberately make it occur, had to move it forward via the character. I empathized more strongly, and felt more real fear, because of that. I do think that video games can be a powerful medium, and am happy to see that they have become more complex and emotionally charged over the years.

Also, more things should be about giving the finger to Ayn Rand. Just putting that out there.

This entry was posted in Science Fiction, Video Games. Bookmark the permalink.