I Have No Idea What These Are

I saw these costumes at Last Thursday on Alberta.  The majority of it was comprehensible to me- various bands set up at regular intervals, drum circles, people on stilts, fairy wings.  Normal stuff.  One particular performance, though, was rather mystifying.  I saw the figures pictured below, and found their presence genuinely enigmatic.  They were dancing, and, later one, stood utterly still.  I wondered if they were some sort of traditional costumery, or merely an invented weirdness.  Are the below-pictured a thing?  And, if so, what nature of thing?  I was perplexed. 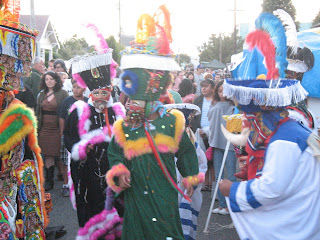 This entry was posted in Portland. Bookmark the permalink.

One Response to I Have No Idea What These Are