A Pretty Okay Daft Punk Video: What I Thought of the New Tron Movie 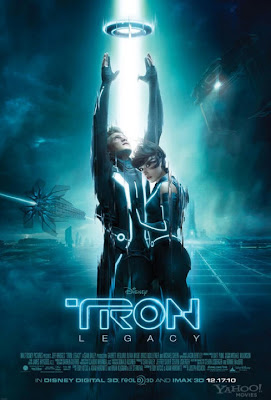 Given that I had a previous post on Tron, I feel bound to offer up a few thoughts about the new movie, which I saw last night.

It was highly adequate. There were a few good thing about it, and a few less good things as well. I’m just going to do a rundown of them. Spoilers ahoy!

-Jeff Bridges. Had Bridges not appeared as Flynn, the movie would have very little reason to exist. His being there made it seem more like a “real” Tron movie, and not just an attempt to cash in on geeky nostalgia (even though it is totally that). I loved it that Bridges played the older Flynn as basically an all-purpose Jedi/Buddha/Jesus/The Dude sort of character, an old man with crazy powers in the Grid akin to that of some kind of wizard/god. Also, seeing him digitally de-aged was a neat party trick. I’m sure that it will look terrible and dated in five years, but I enjoyed it for the time being.

-The movie is beautiful. Stunning. Shiny. Dazzling. Electrifying. It is an eye-poppingly wonderful calvacade of cool visuals. The lights and sets and costumes are all fantastically extravagant and orderly all at once. The aesthetic of Tron seems to be that there is a profusion of energy and color, and it is all tightly controlled. It is ecstatically mechanistic, like a choreographed rave. I wish there was a more positive word for “soulless” because the machine-world of Tron is soulless and gorgeous in the best way possible.

-Likewise, the soundtrack by Daft Punk is excellent. There are very few movies where, upon hearing the soundtrack, I think “I would like to hear that in a context outside of this movie.” This was one of them.

-References to other films were nice. Flynn’s apartment outside of the Grid resembles the apartment at the end of 2001, and at one point he quotes War Games saying “the only way to win is to not play.” Bridges also seemed very conscious of his most famous character, The Dude, and put more than a little Big Lebowski flavor into Flynn.

…And that, unfortunately, kind of does it for the really good stuff.

-The action sequences hit their marks, but they weren’t all that thrilling or memorable. While I didn’t find myself groaning or disliking them, they weren’t incredible.

-Garrett Hedlund, the guy who played Sam Flynn, was dry, bland, and didn’t really seem like his father’s son. He was too preppy and well-coiffed, too much of a nice, clean leading man. Also, the part where he parachutes off of the skyscraper is just dumb.

-Olivia Wilde (Quorra) also didn’t thrill me, but she was very nice to look at.

-I didn’t imagine I’d ever think, while watching a movie, that it needed more Bruce Boxleitner. Tron: Legacy, though really did need precisely that. Tron himself appears several times in the movie, but always wearing a black face mask that completely obscures his features. Normally, I’d just think that this was the kind of cheap trick that a director would use if they couldn’t get a given actor for their movie, but Boxleitner appears as Tron’s creator, Alan, early in the film. He also shows up as Tron in a flashback. He could have totally whipped off the mask for a big dramatic reveal! I was expecting that. Not having that there was strange and aggravating.

-Oftentimes, the movie was way too talky and self-important. Instead of dramatic it seemed staid.

-The filmmakers seem to have forgotten that Tron is supposed to happen inside of a computer. The Grid is portrayed as a kind of alternate dimension. In the original film, Tron & Co. were inside of a specific computer system. They don’t explicitly contradict this, but it bugged me somewhat.

All in all, the movie wasn’t great unless you were already a Tron fan, and even then, it was only kind of okay. I’m sort of nervous that the franchise (which had once been a nice little piece of cult nostalgia) is going to get crushed under a new wave of sequels and spin offs. I saw Star Wars get revived, only to be crushed to death by its resurrection. That franchise is in a state of deeper necrosis than it ever was precisely because things were added to it. I don’t want the same thing to happen to Tron.

On the other hand, I did love all the pretty glowy lights set to Daft Punk.

This entry was posted in Movies, Music, Science Fiction. Bookmark the permalink.