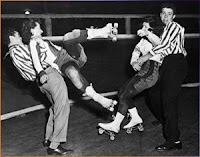 About two weeks ago I found myself in Seattle, watching several scantily clad women run around and tackle several other scantily clad women. They were, theoretically, playing football. Not very good football, mind you. There weren’t many completed passes, and the game was pretty lopsided, score-wise, but there were scantily clad women, which theoretically made up for that. (American football, by the way, is a game that I would be more into if there weren’t so many interruptions. It’s tactically interesting and can be exciting in fits and start, but the pace of the game really kills it for me.)

It was the opening night of the Lingerie Football League in Seattle, and as semi-amusing as I find the conceit I could not help but be reminded of the XFL, the failed and gimmicky “extreme” football league started (and folded) some years ago by wrestling mastermind Vince McMahon. Like the XFL, lingerie football seemed extraneous- an established sport with a patina of something allegedly interesting on top of it. The “extra” part of it, though, the girls and their semi-unclad states, was not sufficient to really hold my attention. Even though two teamsworth of conventionally attractive women were piling on top of each other (though not especially well) I didn’t really see too much of a reason for the league’s existence other than the brief novelty we were all enjoying in our variously semi-drunken states.

The whole time, I thought to myself “Roller derby is much better.” The comparison was unavoidable, really. Both are active spectator sports, and both feature attractive women falling down. The next week, miles southward in Eugene, I got to view my preferred ladysport, watching the last bout of the year of the Emerald City Roller Girls.

Roller derby, however, is it’s own realm and species, unlike other forms of competition. Because of this, the attitudes and sexiness of it all come across as intrinsic and essential, an organic part of it without pretense or artifice. Moreover, it has teeth, and the teeth are half the reason I enjoy it so much.

For some reason or another, roller derby has become a sort of hipster/punk/indie/etc. event, a spectacle bedecked with skulls, flames and attitude. The derby girls sport noms de track such as “Lil’ Whip-Her Snap-Her,” “Bettie Aim Fire,” “Slapcat,” and “Reign of Tara.” Team uniforms are not uniform at all- embellishments and flairs of individuality are common. There may be fishnets here and garters there, flashes of nonuniform color or different stuff on helmets. The roller girls really do look a lot like a gang, like a bunch of like-minded people who just happen to dress in a very similar fashion.

Once they start rolling, the action itself stays, and interruptions are usually only about thirty seconds. By definition and nature derby is about speed and maneuvering, tactical issues that carry the unavoidable side effects of people falling down. It is jostling through a crowd, except the crowd is zooming and turning. There is action, music, and spectacle. Lingerie football billed itself as something explicitly prurient, and for that reason my interest in it (and the girls) flagged. Roller derby is not prurient. It is a real sport. There is impassioned competition flying by, courtesy of those wheels and axles. There is a sheen of sexiness upon it, but like I said that sexiness is emergent rather than applied. Watching the roller girls, I found them in their embellished uniforms far more interesting than any of the football chicks. Given the choice, I know which breed of female I would rather chat up.

Which brings me to a larger point. I’m going to ignore the creep-factor of a single guy talking about chicks, and talk about them anyway.

I’d take Bettie Page over Marilyn Monroe, thorns over roses, Suicide Girls over Hustler. My preferences are by no means radical or even all that unusual, but I like to think that this choice of attitude and aesthetics says something positive about me, makes me a better man in some respects. I would by lying if I said that I didn’t feel superior to “ordinary” guys because of these preferences. I set myself apart from the rotund guys wearing football jerseys because I think “I get off on better quality shit than you do, suckers.”

I don’t think that this is simple arrogance. I really, honestly do think that roller girls are sexier than lingerie football girls, and I actually do think that finding them so is the more enlightened/feminist/socially responsible/generally interesting position. The conclusion that I’m drawing here is that I like women who are actually ambitious, creative, and idiosyncratic. By extension, I’m putting guys who like conventional blond bimbos in a negative light- supposedly if I like these things, they don’t, and I, therefore, have a cozy place where I can feel arrogant and superior.

This does bother me slightly, but turning the idea over in my head I can’t get away from the feeling that I am, in fact, right. Heres why. The lingerie football girls all seem to be approximations of some kind of cenerfoldian ideal that remains unreached, and therefore they do not become as interesting as their skate-mounted counterparts. (By the way, I’m sure that individually they could easily be highly cool, but I’m dealing in generalities and images here.) The derby girls, on the other hand, seem to have dispensed with such uniform pursuits and mostly just present themselves in a way that they find interesting and suitable. This is much better, and why the aesthetics of roller derby interest me much more.

Armpieces, centerfolds, and trophies are boring. I don’t think this is a misogynistic conclusion to come to. If anything, I think it’s a very feminist position for a guy to have. I don’t want to personally associate myself (or find myself in the position of wanting) a girl who has all the personal constitution of a well-soaked piece of gingerbread. Granted, both the lingerie football and derby girls were presenting themselves as tough. But, in the case of the football girls, it was a kind of parodic and cute toughness, as if inviting us to say “Aw, look! The chicks are doing boy things!” Roller derby, though, has none of that.

I’ll probably never go to another lingerie football game, but I’m definitely catching roller derby again. The Rose City Rollers are supposed to put on quite a show, and I’d love to see it on a banked track, rather than a flat one. Wheels and attitude. That’s what will keep me coming back.

This entry was posted in Athletics, Eugene, Seattle, Sex. Bookmark the permalink.