"But the evil is that they hold for certain that they are in the light." 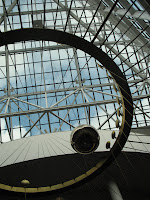 I sit down at my computer on Sunday night, all ready to finish up my post on Foucault’s Pendulum by Umberto Eco that I’d been working on earlier, and what do I find? That post-stealing cockblocker Seph has beaten me to it. The nerve. Nevertheless, I had this thing mostly written. Might as well finish it up…

The plot centers aroudn three editors at a vanity press are up to their earlobes in manuscripts about the occult, conspiracy theories, and general weirdness. To amuse themselves they decide to create a world-spanning fictitious model of history and reality that connects all of the esoteric stuff that they’ve read about, a grandiose intellectual game they call the Plan. Problems arise when a rather nutty group gets wind of their fictitious explanation of everything, and takes it seriously. Indeed, even the creators of the fictitious Plan take it far too seriously themselves, and eventually their creation consumes them.

(Incidentally, I would not have really enjoyed the book very much had I not been constantly consulting Wikipedia about the various historical, religious, and esoteric references the tome is crammed with. I liked the intricate connections and fanciful historical weaving, but constantly having to look up what the hell the characters were talking about made it something of a slog.)

I will admit to having a sort of enthusiasm for this kind of thing- I loved The Illuminatus! Trilogy, have read both the Principia Discordia and the Book of the SubGenius, and know what “fnord” means. The central appeal of the occult or conspiracy theory genre is that at least someone is in charge, at least that which appears arbitrary and meaningless from the outset actually has a place in a grander scheme. Everything means something, and while the world may be dangerous and mysterious, it is at least not capricious. I understand that appeal, enough that I sported an eye-in-the-pyramid on my arm at Burning Man. However, I also engaged the book somewhat seriously, and through the filter of my own particular biases and interests.

So much of what is described in Foucault’s Pendulum- the esoteric arts, arcane secrets, cloistered spiritual orders -seems to imply a certain amount of contempt for the wondrous nature of the real world. For truths to have any sort of impact or value for the esoteric scholars in the book, they need, necessarily, to be secreted from view, to be apart from and cloistered off of the “real” world, to be part of narrative that is not accepted by “conventional” descriptions of history or science. Some of the most painful, and poignant, chapters of the book are when the main character’s girlfriend offers him grounded and realistic insights into some of the details of the Plan. She is persuasive and touching in her deconstruction of the “hidden” truths that the narrator and his friends have concerned themselves with, but despite her enlightenment, despite the fact that he even says “yes” to her, the narrator and his companions still remain enmeshed in their all-consuming fiction.

Despite the book’s slogginess, I found this emotional thrust to be deeply affecting. Years ago, I spent no small amount of time in the occult and New Age section of a used bookstore in Eugene, stocking shelves and conversing with the patrons there. I could not help but feel that these book buyers, these enthusiasts of the occult and arcane, needed their truths and revelations to be hidden and privileged. Knowledge, for them, did not come from the “real” world, but from a realm actively suppressed and ignored by reality.

Giving these people their books, ringing them up and hearing their comments about them filled me with a range of emotions that went from pity to anger. In the rest of the store one could find books on history rather than conspiracy theories, medicine rather than auras, philosophy rather than hokum. Set before them was the choice between that which was enriching and real, and that which was self-deluding. They chose, actively and deliberately, to delude themselves, much like the narrator of Foucault’s Pendulum fails to heed the advice of his girlfriend. Worst of all, they thought that they were privileged with truth, privy to something more real than real.

Again, This is not to say that I don’t find that sort of stuff amusing. I think that delving into weird shit and strange beliefs is a lot of fun. It’s utter brain candy, and as such I could entirely identify with the pretentious editors in Foucault’s Pendulum, men who take obvious scholarly joy in weaving all of this stuff into a coherent whole as an exercise in intellectual gamesmanship. At the end of the day, though, there is more real wonder in a single real leaf than in fraudulent delusion. The conduits of the greenery, the veins and the stems, the photosynthetic processes and changes from green to gold- all of these are greater truths and more potent revelations than anything about telluric energy or Templars. There is more active power in those intricate veins than in all of the ley lines that supposedly cross the Earth. Realizing that, one should not mourn the death of delusions or cry over the loss of intricate conspiracies. Rather, take joy in reality, chaotic and undirected though it may be.

(One last thing, unrelated to my above rant. When the Da Vinci Code came out, the thematic similarities were obvious and Eco was asked if he’d read it. His response:

I was obliged to read it because everybody was asking me about it. My answer is that Dan Brown is one of the characters in my novel Foucault’s Pendulum, which is about people who start believing in occult stuff.
– But you yourself seem interested in the kabbalah, alchemy and other occult practices explored in the novel.
No. In Foucault’s Pendulum I wrote the grotesque representation of these kind of people. So Dan Brown is one of my creatures.

As far as I’m concerned, that is some serious literary bitch-slapping, proclaiming a lesser author to be one of your comical characters. I think that Umberto Eco could probably make Dan Brown’s fingernails fall off just by staring at him, such is his brainy power.)

This entry was posted in Books. Bookmark the permalink.

3 Responses to "But the evil is that they hold for certain that they are in the light."