Annotations To an Enjoyable Experience 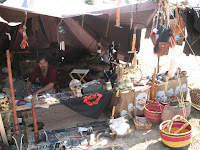 (Don’t get the wrong idea about the following post- I had a great weekend. But, I’ve already talked about the positive aspects of dressing funny whilst camping, and this post is about something else. Think of this as an annotation, or addendum, to something that is mostly positive.)

Celtic knots and skulls seemed to be on everything. Bracers, boots, coats, necklaces, tatoos. The intricate, interweaving braids and headbones formed the ornamentation of choice, closely followed by pentagrams, dragons, and the occasional fairy. It was hot, unpleasantly hot, and I wanted a cigarette. No idea why. It’s a vice I try to limit, but I was in a mood and craving one. I was dressed as a pirate. All around me, other people were also dressed as pirates.

I was at what people who are into this sort of thing term an “event,” a large-scale camping trip wherein lots of people strut about in historical garb, maintain historical personae, and generally carouse and drink a lot. Several of these events are associated with the Society for Creative Anachronism. This one wasn’t- it was a pirate-themed extravaganza Called Sea Dog Nights and Gypsy Carnival. I’ve done this sort of thing before and enjoyed myself, but last Saturday found myself wandering and filled with a peculiar kind of anxiety about it all, an anxiety that I think had something to do with all of the Celtic knots all over the fucking place.

I don’t want to sound too pedantic, but Celtic imagery has about as much to do with historical pirates as petunias have to do with janissaries, and the juxtaposition was bugging me. (Bear with me here- I’m not trying to bitch, really. This is not a “Joe spews bile on x” post, not that I ever do that.) What was bothering me, is that the connections seemed tenuous and almost arbitrary. All over the place people were dressed in in Hollywood-style pirate garb, kilts, belly dancing skirts, boots, tricorn hats, flowing dresses, etc. It seemed, at once, a wild motley of unrelated things, a hodgepodge of anachronism. At the same time, though, there was a weird, settled uniformity to it. Almost all of the visual elements were things that had been adopted by geek culture, things that I was familiar with because they’d been adopted as recurring visual tropes by the sort of people who know what THAC0 means. 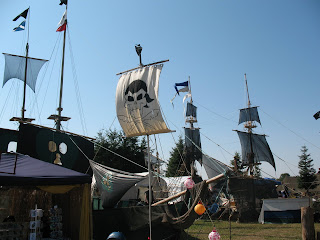 This bothered me. I looked around, very much hoping for some kind of originality, some kind of garb or conceit that would surprise me, and found not much of it. There was one guy dressed up in gear that looked African in origin, and I thought that was quite cool, but saw little else in the way of aesthetic differentiation. There were only the same sorts of variations- look, here’s a skull! Here’s a ship, a dragon, a pentagram!- recurring again and again. I wanted someone (for clearly there were a lot of creative, driven people involved in this thing) to mix it up. I wanted someone to wear a Fez or samurai armor, to dress up in a toga or gladiatorial gear. I wanted see someone bedecked in Aztec finery or have the rigging of a Chinese junk set up in their camp. The whole thing was crazy, yes, creative, definitely, but I wished that it was more insane and unrestrained, more varied and unrestricted. More diverse, divergent, and arbitrary, even more anachronistic. If histories were going to clash with each other, if supposed “pirates” were going to walk around with kilts on, than I wanted it to be anachronistic all the way. Vikings in cowboy hats. Centurions with muskets. Persian Immortals behind Prussian artillery. It wouldn’t clash any more than this Norse-looking figurehead at a pirate party. 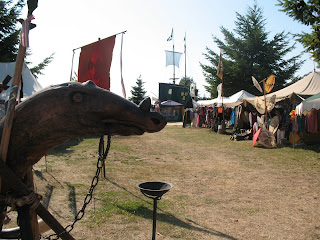 The standard tropes seemed far too comfortable. I wanted someone to do something risky.

Make no mistake- I had a great time. I had a really good time. I mingled with my friends, drank a lot, and greatly admired the industriousness of my roommate K who managed to construct a wonderful and quite comfortable pavilion for us to hang out in. The inside was strewn with carpets, drums and cushions and a hookah acted as a centerpiece, making the camp a bit different from the normal “scurvy dog” theme that kept popping up. Lounging about inside, I had nothing but appreciation for her creative energy, and, indeed, saw her deviation from the norm as laudable. 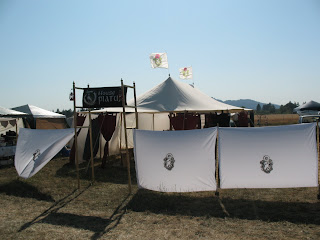 At night I took in fire dancing and music, and in the dark the ships’ masts and pavilions of the participants lost all hokiness, and I was taken in by the experience. Yes, I was taken in, eventually. I sang, pranced about, and had fun, even as I thought way to much about it.

But, I kept thinking to myself: Go further. If you’re going to play fast and loose with history (and I’m okay with that), then play as fast and as loose as you can. I would have nothing but respect for someone if they showed up at something like this dressed as Barbary Corsairs or Zulu. I would applaud anyone who dressed as a detachment from the Golden Horde or the Huns. Variation, daring, rather than staid replication of the standard tropes, would have breathed even more life into the event. Instead, the same safe themes and memes were stamped out again and again.

There is a Wondermark comic that I quite like, purporting to show next year’s internet memes. Instead of ninjas and pirates it shows deep-sea divers and gendarmes, among others. I appreciate it greatly, because it shows the arbitrariness of fads and crazes, and posits that deep sea divers are just as potentially meme-worthy as, say, ninjas. It’s a nice wake-up call to anyone who has been immersing themselves in the cozy repetitions of the internet and popular culture. The fad that you see as so whimsical may indeed be, but it is not apogee of quirk or fun. There is plenty of other stuff out there to gawk at- plenty of the world that can be mined in the name of oddness.

I’ll definitely go to an event again (I like camping, and I like drinking, and they tend to be mainly that) but I think that the participants could learn a thing or two from that Wondermark comic. Remixing the same song over and over again does not make for a good party. Yes, pirates are kind of neat. Even the Hollywood sort. But c’mon- branch out, reach out. It’s not like anything is historically accurate right now, so you might as well go fuck-wild and be awesome about it. I think these last guys were onto something: Pirate motor cycles. Purple, chrome, and ahistorical in a gleeful, badass way. 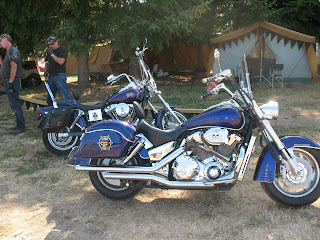 This entry was posted in History, Social Conventions. Bookmark the permalink.

5 Responses to Annotations To an Enjoyable Experience